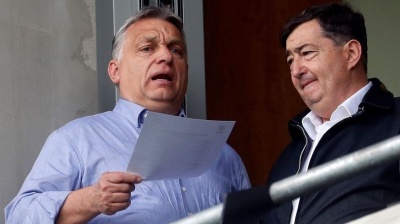 Opus, the flagship holding company of Hungary’s most powerful oligarch Lorinc Meszaros, has won HUF33.5bn (€96mn) in state contracts since the state of emergency was declared in late March, according to a compilation by local media on May 30.

The eleven projects include utility, construction and railway development works. The largest contracts in value were sealed by railway construction subsidiary R-Kord.

The company is also part of the Hungarian-Chinese consortium for Hungary’s largest railway project, the construction and upgrade of the Budapest-Belgrade railway line for $2.1bn financed by Chinese Exim Bank. The company expects to generate HUF295bn income from the work between 2020 and 2025, according to an earlier statement.

Opus released its Q1 earnings report over the weekend, which showed the company posting HUF2.7bn in after-tax profit, bouncing back from a HUF16.6bn loss in the same period a year ago. Except for tourism, coronavirus (COVID-19) had little impact on the company’s operations due to its diversified operations.

The balance sheet total fell 17% to HUF535bn due to the sale of the country’s second-largest power plant, Matrai Eromu, in late March. State electricity company MVM became the sole owner of the coal-fuelled plant accounting for a fifth of the country's production after acquiring 72.66% stake in the company HUF17.4bn.

The group, which consists of 42 companies in four major segments (energy, agriculture, industrials and tourism), achieved a consolidated operating profit of HUF4.8bn due to a 16% decrease in operating revenues and a 44% decline in expenses. Ebitda reached HUF10.7bn after a loss of HUF10bn in the same period a year ago.

Opus and Konzum, the two BSE-listed companies owned in part by Meszaros, completed their merger a year ago creating a conglomerate with critical scale which could attract global investors and fresh capital.

After the transaction, Opus’ portfolio expanded with the country’s largest hotel chain. Hunguest Hotels, which operates 24 hotels 19 in Hungary and five abroad and two other hotels in partnership.

Opus informed investors that 14 hotels within the group became eligible for HUF18bn grant under the government’s hotel development scheme, Kisfaludy2030.

Opus closed all of its hotels and reduced staff by 50% at Hunguest Hotels due to the pandemic. The company used the shutdown for the reconstruction and upgrades of hotels converting them to four- and four-star superior ratings.

The company’s capital position remains stable and its operations are secured even if the pandemic situation is prolonged, Opus said in a statement.