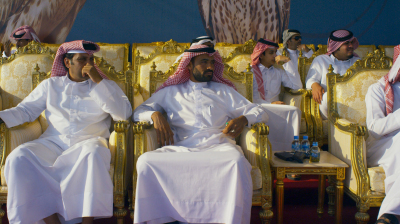 Art documentary about Qatari falconry tournament is a mesmerising journey into the timeless desert. / Slingshot FIlms
By Vadim Dumesh in Paris April 14, 2017

At a meeting with President Vladimir Putin in January, Sheikh Abdullah bin Mohammed bin Saud Al Thani, the CEO of the Qatar Investment Authority and a member of the Thani royal clan that settled in Qatar in the 1700s, promised “more energy deals” to the Russian leader.

Only in 2016, the sovereign fund of the wealthy Gulf kingdom invested about $2.5bn in a stake in Russia’s largest crude oil producer Rosneft, bought a $1bn stake in a major airport, and according to Russia’s ambassador in Qatar, is ready to invest billions more in the nascent Russian liquefied natural gas industry.

If behind those headlines you have ever wondered about the life of the mysterious super-rich of the Gulf, you should not miss the latest work of successful Italian video artist Yuri Ancarani. “The Challenge”, an extraordinary visual journey into the landscapes of Qatar, will screen in festivals in Moscow and Poland.

It takes some time to figure out where the film is taking you. As much as gallery and modern art museum pieces, the films of Ancarani defy direct leads, explanation and commentary. It doesn’t take long, however, before a world of endless fascination overtakes the viewer of this tale of faraway lands.

“It has to be noticed that Qatar was a very poor area until recent times when the gas resources were discovered,” Yuri Ancarani told bne IntelliNews on the sidelines of Cinema du Reel, a prestigious film festival in Paris, one of many highbrow venues to have screened “The Challenge”.

Independent since 1971 and today boasting the highest per capita income in the world, Qatar saw its pearl-based economy crash in the 1930s with the introduction of the Japanese cultured pearl. But the discovery of the world’s third-largest natural gas reserve in the 1940s propelled the tiny kingdom to become a regional geo-political player and a global investment powerhouse.

In “The Challenge”, the saturated, bold cinematography is indeed as lush as the excesses it depicts. Lamborghinis with pet cheetahs, golden choppers on desert highways, and private jets with custom falcon seating paint a world in which luxury is abundant, crowning the vast endless desert.

“My film wanted to focus on the latest development when Qatar became one of the richest nations on the planet, and it became a paradise in which work is obsolete and one can dedicate himself to his passions,” says Ancarani.

The passion that he chose in the film is falconry: the film follows the intricacies of this ancient noble pastime. From choosing and buying the birds that can trade at up to $0.25mn, to training and grooming them, to the crescendo of large annual falconry games gathering thousands. And as ancient as this tradition, the landscapes of the film are monumentally timeless.

“One of the readings of the film is how wealth is modifying the traditions of the Middle East,” according to Ancarani. Indeed, while the gestures in the falconry challenges could have been performed for millennia, bird auctions are televised live, the desert navigated in premium SUV’s, while high-ranking challengers fly in their falcons on private jets.

With jagged skylines rising above the desert, where 4x4 SUV’s drift through the dunes, and a gang of Harley Davidson motorcyclists on a lonely highway, one could easily mistake Qatari landscapes with southern parts of the United States. The ties between the US and the Gulf kingdom run deep not only culturally: Qatar is home to the largest US military base in the Middle East.

Ancarani chose Qatar as the main location for shooting as the youngest and the richest of the Gulf states, travelling also in Doha and other large cities. He recalls a revelatory discovery of ideals of beauty that are not rooted in European Renaissance, but rather in the aesthetics of Las Vegas.

“It was a real struggle to see the lives of Qataris that were more in touch with their tradition, as it was not present in the cities that are largely for tourists,” the director says as he discusses one of the main leads of the film: the desert. “We’re talking about the people who are historically and still now are Bedouins, living in the desert, living in the desert their whole lives.”

“When we finally went pass the touristic facade of desert camel rides, another life  opened up in the desert, a life which we are not allowed to see,” says Ancarani. “That’s what I found incredible – beside these surreal cities, the people still keep on living the desert as their own place.”

Ancarani’s camera is nothing short of celebratory of this reigning tradition, albeit modified by the caprices of current zeitgeist. His view is universal and so far removed that his frames manage to capture the history itself. As a consequence, “The Challenge” is depersonalised (which could itself be a challenge for some viewers) and, more importantly, devoid of judgement or critique.

Perhaps the film did not set out to do so, but even a slightest attempt to critique, however, would reveal that all courts have secrets and all luxury has its price.

For Qatar, not unlike the kingdoms of the past, this secret is serfdom: with a population of 2.6mn the country only counts about 0.3mn Qatari citizens, the rest being mostly migrant workers, maintaining the economy of excess at a ratio of 1 to 7 in conditions that have been called out as modern-day slavery.