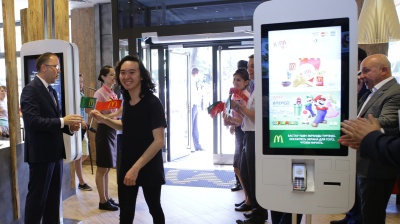 The Kazakh franchisee of US fast food giant McDonald's, Food Solutions KZ, has suspended the operation of all its restaurants "due to restricted local supplies".

Kazakhstan’s 24 McDonald’s restaurants were shuttered on November 18. Food Solutions KZ has provided no details on the scope of the supply restrictions and has not indicated when the outlets might reopen. Local news agency NG.kz reported that staff at a McDonalds restaurant in the city of Kostanay claimed the suspension would only last two weeks.

Local supply issues could be related to disruption faced by regional supply chains following the outbreak of Russia’s war in Ukraine in late February. Kazakhstan has traditionally relied on many of its imports transiting through Russia.

After McDonald’s exited Russia in response to the invasion of Ukraine, Vkusno i Tochka (Delicious, Full Stop), a Russian chain that has attempted to start its own burger restaurants using the American fast food brand’s deserted McDonald’s outlets, quickly encountered supply issues. At one point, customers were informed there were no french fries as the McDonald’s inventory Vkusno i Tochka was relying upon, at least in its early days, ran out. It’s not out of the question that a similar issue has arisen at the Kazakh branch of McDonald’s.

If the suspension in Kazakhstan turns out to be a prelude to a permanent McDonald’s shutdown, Vkusno i Tochka might take an interest in stepping in to fill the void. The Russian chain recently announced its intention to enter the Belarusian market, though Belarus is a different case to Kazakhstan in that it is, like Russia, under heavy Western sanctions given its support for Russia’s war in Ukraine.

Food Solutions KZ belongs to an ally of former president Nursultan Nazarbayev, Kazakh businessman Kairat Boranbayev, who was detained in March on embezzlement charges. Nazarbayev has lost his power and influence in the country following the “Bloody January” civil unrest that broke out nationwide at the start of the year. It is unclear whether political factors could be related to the closing of McDonald’s in Kazakhstan.

The closure announcement came right before the November 20 snap presidential vote at the weekend, which saw Kazakh President Kassym-Jomart Tokayev win by a landslide. The January unrest involved violent attacks on many buildings. There is some speculation that the McDonalds suspension was introduced to ensure the outlets were shuttered and secured during the election period.