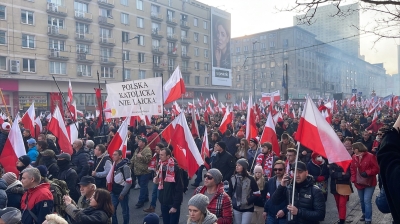 An estimated 100,000 people marched through central Warsaw on 11 in the annual Independence March organised by Poland’s far-right groups.

Unlike in previous years, the march took place without further trouble. As always, however, it was laced with racist slogans that have made it the Polish far right’s top event, drowning out any other forms of celebration of Poland’s independence for over a decade now.

Following a legal tussle with Warsaw’s liberal town hall, the march eventually went ahead after the government granted it status of an official state event. Poland’s right-wing coalition government led by Law and Justice (PiS) has long pandered to nationalists to ensure no major political force appears further on the right to challenge it.

“Poland is being attacked by Russia via Belarus from the east and by Germany from the West. We are at war for our culture and identity,” Robert Bakiewicz, who leads the organisation of the march, told the crowd.

Poland is facing a migration crisis along its border with Belarus, where thousands of migrants are being trapped between the Polish military and Border Guard and Belarusian servicemen.

Warsaw is also at odds with the EU on a number of issues, most importantly rule of law, with billions of euros of funding from Brussels in question over the government's reforms of the judiciary. That has stoked anti-EU sentiment in the government and its acolytes like Bakiewicz. The leader of the Independence March received millions from public funds this year.

There were minor incidents during the march like burning of a German flag and a photograph of the former Polish prime minister and president of the European Council Donald Tusk. "I'm on fire to work for Poland even harder," Tusk quipped in reaction.

Some participants shouted abuse at Warsaw mayor Rafal Trzaskowski, who tried to block the march in court but was eventually overridden by the government’s decision to make the march a state event.

Reporters spotted the leader of the Hungarian’s far-right Our Homeland Movement, Laszlo Toroczkai, participating in the march. Some participants sported the flags of Italy’s Forza Nuova.