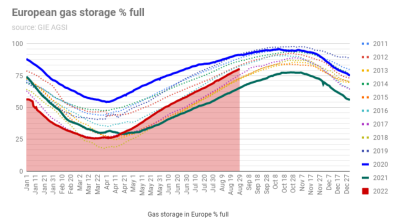 Europe's gas storage tanks were 80% full on August 30, hitting the EU's target a month ahead of time. / bne IntelliNews
By bne IntelliNews August 31, 2022

The EU has filled its natural gas storage facilities to 80% of capacity on August 30 – two months early. (chart) The November 1 target, introduced by the European Commission back in May, was considered ambitious at the time. However, the market has largely done the job that governments mandated.

Anxious of much higher gas prices in winter, those that can are stocking up on gas now to sell extra volumes later. Ironically, this is the typical trend for any year in the European gas market. Normally, traders stock up on cheap gas in the summer, when demand is low, and then release it from storage in the winter, when they can fetch a much higher price.

The reasons are clear. An energy crisis that has been building for the last year and a half has been exacerbated by steep cuts in Russian gas supply, especially since June, when Gazprom began curtailing flow via the Nord Stream 1 pipeline. That pipeline is now running at only a fifth of its 55 bcm per year capacity, and it is due to close down completely on August 31 so that Gazprom can conduct three days of maintenance. Gazprom claims that sanctions have made the proper operation of the pipeline impossible. A key issue is the timely maintenance and repair of turbines supplied by Siemens that are vital for the operation of the Portovaya compressor station that handles the gas that is pumped into Nord Stream 1.  This is a red herring. It is likely true, but does not explain why Russia does not simply pump more gas to Europe via other routes. It certainly could.

A summer heatwave, which has led to significant drops in hydroelectric capacity across the continent, especially in Norway, has not helped matter. The hot weather has also dried up rivers, making it hard for ships loaded with coal to reach power plants. Particularly low wind speeds have also curtailed output at the continent’s increasingly large fleet of turbines.

Where does Europe stand at this moment? When the risk of a complete shutdown in Russian supply is unlikely but perfectly possible. The EU currently has some 891 TWh of gas in storage. Gas consumption in 2020 was 4,152 TWh, but every year is different. As a general rule of thumb, member states strive to have enough gas to cover a quarter of their consumption. But they now face the hardest quarter: winter, which can in some years account for close to half of the annual consumption. So much depends on the weather and Russian actions. In February 2020, the then-CEO of Austrian oil company OMV, Rainer Seele, prayed for an ice blizzard to take away the low prices that his company was dealing with. Executives in that same company, and many others in Europe, are likely hoping for the exact opposite this winter.