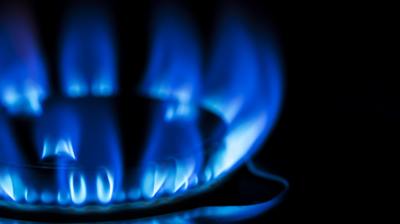 Europe's gas tanks are now 75% full, on track to meet the 80% full by October 1, but prices for gas spiked as fears of a full shut down of deliveries persist. / bne IntelliNews
By bne IntelliNews August 17, 2022

European natural gas prices soared to a new height of above $2,700 per 1,000 cubic metres on August 16, as a number of factors coincided to drive up demand and constrain supply, ratcheting up pressure on Europe’s leaders in their standoff with Moscow. The price spike comes as the EU has nearly filled its gas storage facilities to close to three quarters of capacity, meaning the bloc has around 75bn cubic metres of gas in storage and is just 5% shy of reaching its goal of having its storage sites 80% full by November 1. While this target now looks very achievable in practical terms, the latest increase in prices will drive up the cost even further.

The September contract at the Dutch TTF gas hub climbed nearly $2,720 per 1,000 cubic metres at around 13:00 GMT on August 16. Russian gas supply remains significantly constrained, having slumped to an all-time monthly low of 3.6 bcm in July, down 23% from the previous low registered in June.

Russia has blamed the latest reductions in flow on operational problems at the Nord Stream 1 pipeline, arguing that sanctions have hindered maintenance of the Portovaya compressor station that handles the pipeline’s gas. But European leaders have accused Moscow of manufacturing an excuse to cut supplies to the continent and put further pressure on its energy system, in an attempt to force concessions in the Russia-Ukraine war, such as the ending of arms supplies to Kyiv. Russia could ramp up gas supplies via Ukraine to offset constraints at Nord Stream, but has chosen not to, they argue.

At the heart of the issue is the delayed return of a Siemens turbine used at Portovaya that was sent off to Canada for repair. The turbine is now stuck in a German port awaiting delivery back to Russia. Berlin claims there are no remaining obstacles to its return, accusing Moscow of blocking the process. But Russia has said it lacks the paperwork to receive the turbine, demanding reassurances that sanctions will not prevent the repair and return of additional equipment.

The situation has been exacerbated by scorching summer weather across the continent, which has led to soaring energy demand for cooling systems, and has caused water levels to drop rapidly, hampering the transport of energy goods such as coal and triggering a slump in demand at hydroelectric plants.

Lower wind power output has also made the situation worse, with generation at German wind farms dropping close to zero for periods on August 16. French nuclear outages continue, while Norway has had to cut its gas supply to the continent because of field maintenance, and its government has warned it may have to limit power exports to the rest of Europe because of low water levels at its hydroelectric dams.

Data published by Gas Infrastructure Europe shows that EU gas storage facilities reached 74.74% of capacity on August 13. Gas storage injection rates have largely followed the average trend for the last two months, even though the cost of storing those volumes has been increasing. The EU has mandated that bloc members fill their facilities to 80% of capacity by the end of October, but the market has largely done governments’ work for them, as traders have been stockpiling gas because they anticipate even higher prices this winter (see chart).

Bringing storage volumes to 80% of capacity is realistic, but the cost will be staggering at today’s spot prices. Futures contracts at TTF have remained above $2,000 per 1,000 cubic metres and at times significantly higher since late July. At this price, it would cost roughly $10bn to reach the EU target, and the bill would rise to $30bn if the European Commission’s ambition of taking utilisation even higher to 90% before winter is realised.

Were Russia to cut off gas supply to Europe entirely, as some leaders have warned, the situation would of course become radically different. How significant the impact would be would depend greatly on the weather ahead and the availability of LNG. Global LNG supply is already at a record level of capacity, raising questions about how many extra shipments the EU can procure.

The outlook going forward will also depend on the EU’s success in curbing gas demand to save supplies for the heating season. So far, Brussels has only asked member states to impose 15% voluntary cuts in consumption until the end of next winter. But those cuts could become mandatory if the European Commission decides it is necessary if the risk of winter shortages becomes extreme, though the mandate would still need to be approved by member states. In any case, many member states will be able to secure exemptions from a mandated cut, under a watered-down version of the Commission’s proposal that was signed off on by national governments last month.

Meanwhile, European countries have been jacking up energy bills for consumers in order to avoid suppliers falling into bankruptcy because of soaring  purchase costs – a fate that Uniper narrowly avoided thanks to a bailout deal reached with the government. The price cap for energy bills in the UK, for example, is expected to exceed GBP4,000 ($4,800) this winter, according to analysis from Cornwall Insight, and the rising cost has led to protests across the country. Similar actions are taking place elsewhere in Europe. European leaders face two main challenges this winter: preventing their energy systems from collapsing and avoiding mass unrest among the populace, all while the soaring cost of energy risks plunging the continent into a deep recession this winter.

OUTLOOK 2023: Ukraine
7 hours ago
OUTLOOK 2023: Russia
7 hours ago
West prepares to impose price caps on Russian petroleum products
17 hours ago
M&A in Emerging Europe fell by 20% to €32.93bn in 2022
1 day ago
Italy pushes for investments into Western Balkan strategic sectors
1 day ago