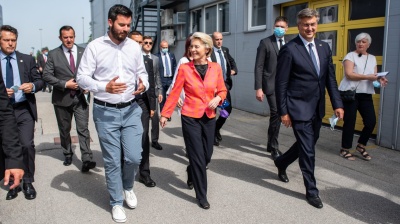 Croatia’s electric supercar producer Rimac Automobili will receive a €200mn grant from the European Union’s €6.3bn aid package for a project to develop a driverless taxi, the company said in a press release.

“The project for the development of vehicles and infrastructure for new mobility has been recognised as one of the national strategic projects in the transportation sector, which represents a great potential for the society and economy of the Republic of Croatia in the coming period, as well as globally,” the company said in the press release.

KIA Motors, a company that is a part of the Hyundai Motor Group, is already directly involved in the project, as an investor and shareholder of the company Project 3 Mobility, which is Rimac Automobili’s sister company in charge of the project.

The initial investment in the project, before it reaches commercial phase, is estimated at €450mn, which will come from foreign investors, such as KIA Motors. Rimac Automobili said it is in negotiations with other investors too.

The €200mn grant will be used for the pre-commercial phase of the project.

The company also said that it is developing the project for several years and it is expected to reach commercial phase at the end of 2024.

“We have entered into key partnerships with companies such as KIA (also an investor in the project), Microsoft, the autonomous software provider, and many others. Negotiations are ongoing with about 20 cities in Europe and the Middle East, which would be the first cities where the robotaxi service would be enabled,” Rimac Automobili said in the press release.

It added that cooperation agreements have been signed with several cities.