EU and US warn Turkey against Cyprus offshore drilling 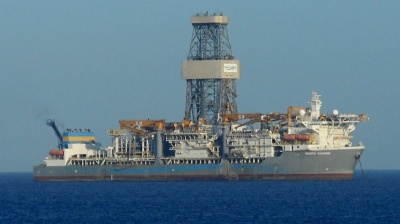 Drilling ship Pacific Khamsin anchored off Limassol on the southern coast of the Republic of Cyprus.
By bne IntelliNews May 6, 2019

Both the EU and US have expressed deep concern at Turkey’s announcement that it is going ahead with plans to start exploratory drilling for gas and oil off Cyprus, a move that Brussels has said would be illegal. Turkish Foreign Minister Mevlut Cavusoglu said at the weekend that “we are starting drilling” in the region.

EU foreign policy chief Federica Mogherini expressed “grave concern” about Turkey’s intentions, stating: “We urgently call on Turkey to show restraint, respect the sovereign rights of Cyprus in its exclusive economic zone and refrain from any such illegal action to which the European Union will respond appropriately and in full solidarity with Cyprus.”

"The United States is deeply concerned by Turkey's announced intentions to begin offshore drilling operations in an area claimed by the Republic of Cyprus as its Exclusive Economic Zone," US State Department spokeswoman Morgan Ortagus said in a statement.

He added: "This step is highly provocative and risks raising tensions in the region. We urge Turkish authorities to halt these operations and encourage all parties to act with restraint."

Turkey already has strained relations with the EU and is involved in multiple foreign policy disagreements with the Trump administration. The latest row will add to market jitters and the pressure on the sinking Turkish lira (TRY). May 6 saw the TRY fall past six-to-the-USD. At around 14:45 Istanbul time it stood at 6.0196 having declined to 6.0373 at one point. The row over whether the Istanbul election should be rerun also soured sentiment, weighing on the currency.

The level of potential for a hair-raising showdown over energy resources off the coast of Cyprus in the eastern Mediterranean was demonstrated last November when a Turkish opposition leader, Meral Aksener, caused consternation by calling for consideration of a possible repeat invasion of the island. Aksener, a former interior minister known as the “she wolf”, who heads the small Iyi (Good) party, voiced the code phrase Turkey’s army used to launch an assault on the island in 1974.

‘Aishe will go on holiday again’
“You should know that if need be ‘Aishe will go on holiday again,’” warned the nationalist politician. “Cyprus is Turkish and will remain Turkish,” she said to loud applause in an address before Ankara’s parliament. Aksener added that exploration for oil and gas by international energy companies commissioned by the Greek Cypriot government was “imperialist activity” aimed at Turkey.

On May 3, Turkey announced its vessels would be carrying out drilling operations in the Mediterranean until September. Cypriot media reports reiterated that the operation would encroach on Cyprus's exclusive economic zone.

The government of the Republic of Cyprus controls only two-thirds of the Mediterranean island; the northern third has been controlled by a Turkish-backed breakaway administration for 45 years, with multiple peacemaking and reunification attempts making little headway over the years.

European Union member Cyprus has been pressing to develop offshore gas deposits and has signed deals with energy giants Eni, Total and ExxonMobil that have seen them carry out exploratory drilling. However, its claims to deposits overlap with those of Ankara.

Exploration ‘deprives Turkish Cypriots’
Ankara claims that Cyprus’ approach to oil and gas exploration deprives the Turkish Cypriot minority of benefiting from the natural resources that surround the island.

The Cyprus foreign ministry said on the same day it “strongly condemns” Turkey’s drilling operations within its exclusive economic zone, adding: “This provocative action by Turkey constitutes a flagrant violation of the sovereign rights of the Republic of Cyprus.”

Ankara—determined to capitalise on any hydrocarbon reserves it can lay claim to given the paucity of such natural resources in Turkey, causing a big oil and gas import bill that is a major burden on the current account—launched its first drill ship in October off the coast of Turkey’s southern Antalya province.

The ship was located 70 km (45 miles) off the west coast of Cyprus on May 5, Refinitiv Eikon shipping data shows.

Breakaway northern Cyprus says that any offshore wealth also belongs to it because it was a partner in the establishment of the Republic of Cyprus in 1960. The island was divided in 1974 after the Turkish invasion sparked by a brief Greek-inspired coup.