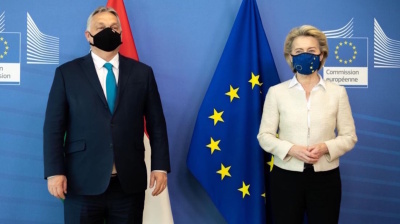 Prime Minister Viktor Orban and Commission President Ursula van der Leyen. / bne IntelliNews
By Tamas Csonka in Budapest December 13, 2022
EU permanent representatives on December 12 reached a deal that should pave the way for Hungary to receive €5.8bn from the post-pandemic recovery fund (RRF) in exchange for the country’s support for the global minimum corporate tax and €18bn in aid for Ukraine.
The deal will help Viktor Orban's regime fill its yawning budget deficit and should steady the forint, the EU's worst performing currency this year.
The Czech rotating presidency announced early on December 13 that member states in principle had agreed on the package of issues requiring unanimity. Hungary was widely viewed as blocking the two major EU policy decisions – the global minimum corporation tax agreement and the immediate short-term financial relief for war-torn Ukraine – to put pressure on the EU to release EU funds earmarked for the country but frozen over its violations of the rule of law.
Last week the EU Council agreed to avoid the Hungarian veto on the Ukraine aid by making each member state take on financial responsibility individually, so that the money will not be lent at EU level. The loan would be provided based on bilateral agreements between 26 member states and the European Commission.
Subsequently on Monday, Hungary finally agreed to drop its veto over the OECD-agreed global minimum corporate tax of 15% to be applied to large multinational companies with a combined annual turnover of at least €750mn, as well as its veto of the €18bn relief package for Ukraine.
In return, the permanent representatives of the member states approved Hungary’s €5.8bn recovery fund, following a recommendation by the Commission earlier this month. The failure to approve the plan before the end of the year would have meant Hungary would lose 70% of the funds. According to financial website Portfolio.hu, only Netherlands abstained from the vote.
In order for Budapest to access these funds or vital Cohesion funds from the EU budget from 2021-2027, however, it needs to fulfill strict milestones set by the European Commission, which are set to spark future conflicts between Budapest and Brussels next year.
EU member states stood by the ongoing conditionality mechanism against Hungary that ties access to EU Cohesion funds to implementing widespread reforms to tackle corruption and guarantee the independence of the judiciary, among other issues.
But member states  agreed to freeze only €6.3bn of the three Cohesion funds, which is €1.2bn less than originally proposed by the EC, "given the degree of cooperation” by Hungary.
Member states acknowledged the work done by the Hungarian authorities but decided that these remedial measures do not sufficiently address the identified breaches of the rule of law and the risks these entail for the Union budget.
“It’s a humiliating night for Orbán,” one diplomat told Politico. “He had to swallow his vetoes and hardly got a reduction on the conditionality mechanism. All to salvage his RRP [recovery plan] and thereby calm the markets at least a little bit for now.”
Orban has also squandered what remains of the goodwill towards Hungary among member states by trying to block the minimum corporate tax and the Ukraine aid.
It is also the first time that the European Council has agreed to implement the rule-of-law conditionality mechanism, a vital new tool against rogue EU states such as Hungary.
The Commission waited until after the Hungarian elections in April 2022 to trigger the mechanism, which is aimed at ensuring that EU countries adhere to the bloc's general principles as well as safeguarding the EU's budget.
In September, the European Commission proposed freezing €7.5bn from the EU budget for 2021-2027 to Hungary, covering three Cohesion funds, as well as the €5.8bn RRF money, over concerns about the rule of law, despite Budapest's pledges to implement reforms.
Hungary had until November 19 to approve a set of laws but the EC’s assessment deemed Hungary’s efforts to tackle corruption and improve the rule of law as insufficient and set 27 essential milestones to meet.
Efforts by Budapest in recent months to tackle corruption and improve the rule of law with the aim of appeasing Brussels were not sufficient to unblock the money, the Commission declared in a statement on November 30.
The Commission in a recent report found that systemic irregularities, deficiencies and weaknesses in public procurement still exist, there are limitations to effective investigation and prosecution of alleged criminal activity. The government had set up an anti-corruption working group and the Integrity Authority, a state administrative body, autonomous of the government, but there is lack of a comprehensive anti-corruption strategy covering also the most relevant corruption prevention areas. Public interest trusts remain outside the scope of EU public procurement directives, the EC said.
To suspend the funds to Hungary, approval by a qualified majority of EU countries is needed, meaning at least 15 of the 27 EU states, which together must make up at least 65% of the total population of the EU.