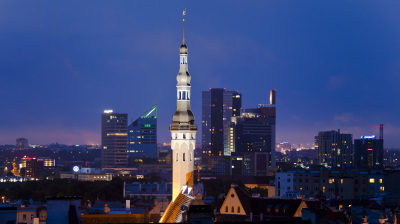 There might be a way for British entrepreneurs and digital companies to stay in the EU even if British Prime Minister Theresa May presses the Article 50 button in May to start the exit process. Estonia is inviting such companies to become virtual residents and keep their EU status, even if they never visit the small country on the shores of the Baltic Sea.

“Estonia is the most digitally advanced country in the world,” the state’s e-registration site ‘How to stay in’ boasts in a bid to attract British companies. “The Republic of Estonia is the first country to offer e-Residency – a transnational digital identity available to anyone in the world interested in administering a location-independent business online.”

Estonia has been a pioneer in putting as much of its bureaucracy and democracy into the cloud as possible. With only 1.5mn citizens and three large towns, the country is already a digital powerhouse. It is the home of the ground breaking VOIP global telecommunications service Skype and online banking has been such a success that the leading banks have closed swathes of bricks and mortar branches. The “Tiger Leap” programme was launched in the 1990s to capitalise on Estonia’s virtual prowess and today the government is almost entirely paperless. Few citizens actually went to the polls in the last election earlier this year, preferring to make use of the I-Voting online system instead.

Now the government is hoping to expand its demographics, in the virtual world anyway, by attracting British companies to register for an e-residency. Established two years ago, the idea is that Brits can keep their European status, even if the company and staff physically stay in the UK. And it is ridiculously easy to do: the ‘How to stay in’ site lists four steps to e-residency.

Currently there are three banks that are participating in the scheme – LHV, SEB and Swedbank. They still require you to physically go to the branch to present your documents in Estonia, but the website informs that “from the autumn of 2016 it will be possible to open up a bank account online”.

Once e-residency has been issued and the company established, the scheme promises firms to be able to “administer the company from anywhere in the world, conduct e-banking and remote money transfers, have access to international payment service providers, digitally sign and transmit documents and contracts, and manage accounting records and declare Estonian taxes online”.

In other words neither the owner nor the staff have to physically ever visit Estonia. The affairs of the company can be all be conducted in a virtual Estonia, while the staff stay in London.

“Keep revenues, costs and financial reports in Euro to mitigate the risk of GBP fluctuations. Growth is incentivised: Estonia has 0% corporate tax when profits are re- invested. Operations and staff can remain in the UK or move to Estonia on your timetable. Low start-up and maintenance costs; e-Residency is easy to apply for, and establishing and running an Estonian company is quick and cost-effective. Spend time on what matters, not admin,” the website explains.

“There were 51 new applications from the United Kingdom in the week following the Brexit vote,” Katre Kasmel, head of communications of the e-residency team in Tallinn, tells bne IntelliNews, noting that applications have been arriving steadily since then from both companies and individuals. LeapIN, an Estonian company selling business management software and offering help setting up virtual companies that rely heavily on e-residency, says it has seen “at least three times more interest” from British nationals since the referendum vote to leave the EU in June.

And the Estonian government is actively promoting the service. On November 14, the British Estonian Chamber of Commerce will hold in London a seminar to show how “Estonia’s global lead in the delivery of e-solutions… gives huge possibilities to create partnerships with British businesses”, according to the press release.

E-residency’s first selling point is its simplicity. Online applications are processed in a few weeks and include a background check. The digital identity card can be picked up from one of the 38 Estonian embassies around the world. This “Smart ID” then opens an array of services such as digital signature, document encryption and secure authentication.

“If the United Kingdom becomes fully ‘disconnected’, there will be people who still want to do business with the European Union. So they will need some legal body here, and Estonia can provide that,” Taavi Kotka, Estonia’s chief information officer, tells bne IntelliNews.

The one caveat that might cause a British company to think twice is that while no taxes are liable as long as profits are reinvested in the Estonian legal entity, there is a 20% dividend tax for any money that is taken out of the company. However, as Estonia has a double taxation treaty with the UK, it could be possible to mitigate this cost.

The programme is not a magic wand to make Brexit disappear entirely. E-residency does not provide full citizenship to the bearer of the e-residency card; nor does it automatically qualify an e-citizen to actual residency in the country. That means it doesn't allow a British firm to circumvent potential trade barriers with the EUn in case of a “hard Brexit”, especially if they produce actual solid widgets. Proponents of the service are reluctant to advise e-residency for large companies or those dealing with physical goods. “If you have a factory in France or in the UK with hundreds of employees, e-residency is useless,” says Taavi Kotka. LeapIN says it currently does not support companies dealing “directly or indirectly” with physical goods.

The programme remains aimed largely at digital companies, service providers, entrepreneurs and any “location independent” business, meaning anyone who moves a lot and can benefit from a centralized management system.

What e-residency does provides for these types of businesses is a “hassle free environment”, says Erik Mell, CEO of LeapIN. Managing taxes, issuing invoices or making online payments, “you can do all this without having to deal with the bureaucracy of your home country,” argues Kotka.

Another benefit is transparency. Crowd Valley, a US financial technology company that provides a back office to support online investing and lending applications, says this is one of the reasons they started integrating e-residency into their solutions in June. “Typically, any platform’s end-users who are investing more than around $15,000 per year require enhanced KYC checks, which sometimes involve uploading passport scans or other manual processes. E-residency as an additional proof-point of identity, which is guaranteed by an EU government regardless of the user’s own nationality, could have a big impact in improving the process,” Paul Higgins, Crowd Valley’s CTO, tells bne IntelliNews by email. Fintech is one of the focal points of Estonia’s e-strategy.

Estonia now hopes that Brexit will help the Baltic country reach its ambitious target of 10mn e-residents and tens of thousands of new companies by 2025. But there is still a way to go. Currently there are 14,000 e-residents, including 735 from the UK, and about a 1,000 e-companies as of now.