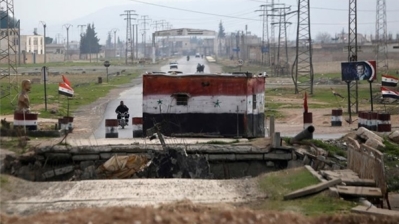 There are conflicting reports on whether Syrian government forces have managed to regain full control of the M5 Damascus to Aleppo highway for the first time since 2012.
By bne IntelliNews February 12, 2020

Turkey’s President Recep Tayyip Erdogan on February 12 issued an ultimatum to Syria: from now on, if even one Turkish soldier in the contested Syrian province of Idlib suffers “the smallest injury”, the Turkish military will strike the Russian-backed forces of Syria’s government by air or ground anywhere it chooses to do so.

Thirteen Turkish soldiers have lost their lives in the past 10 days during shelling that took place as part of a push by the military of President Bashar al-Assad to retake Idlib—the last province in Syria held by insurgents—and declare victory in the nine-year-old Syrian Civil War. Erdogan added in his latest comments that Ankara is determined to push Syrian government forces beyond 12 Turkish observation posts set up in Idlib by the end of February. At the same time, he urged Syrian rebels allied with Turkey not to give the Syrian forces an excuse to attack.

Crucial to the outcome of the standoff is what kind of approach Moscow will take in advising Damascus, also backed by Iran, on how it should respond to Erdogan’s tough line. Following the Turkish president’s comments, the Kremlin accused Turkey of flouting an agreement it made with Russia in 2018 to neutralise “terrorist” militants in Idlib. Stating that militant attacks on Syrian and Russian forces in the region were continuing, Russian President Vladimir Putin’s spokesman Dmitry Peskov said Moscow remained committed to a deal on Syria it had struck with Ankara, but that Russia considered militant attacks in Idlib to be unacceptable and in contravention of that same agreement drawn up to create a de-militarised zone in Idlib.

"In particular, according to this document [the agreement], the Turkish side undertook to ensure that terrorist groups in Idlib were neutralised," said Peskov, according to Reuters. "We continue to note with regret that these groups are carrying out strikes from Idlib on Syrian forces and also taking aggressive action against our military facilities."

Russia and Turkey, however, remain allied by several major common interests, including the leverage they can exert against the US by working together geopolitically, and major energy deals. Thus many analysts would be surprised to see them come to serious blows over Syria. Neither wants to lose face, but the latest fighting could be frozen by a renewed search for compromise. Of course, an ‘accident’ on the battlefield could change the outlook entirely.

The situation in Syria is one of a number of negatives weighing on the Turkish lira (TRY), which fell below the psychologically important six-to-the-dollar threshold at the end of last week and has stayed there. By around 15:00 Istanbul time on February 12, the lira stood at 6.0400, 0.49% weaker on the day.

“By any means necessary”

Referring to the 2018 ceasefire accord, Erdogan said: “If there is the smallest injury to our soldiers on the observation posts or other places, I am declaring from here that we will hit the regime forces everywhere from today, regardless of Idlib’s borders or the lines of the Sochi agreement. We will do this by any means necessary, by air or ground, without hesitating, without allowing for any stalling.”

The threat to use air power may be seen as a very concerning development given that Russia, which has an air base in Syria, has controlled Idlib’s air space for several years. An anxiety must be that Erdogan, under big political pressure in Turkey given economic failures and civil rights abuses that have encouraged ex-allies to form new political parties to challenge his rule of 17 years, feels he cannot at all afford to be seen as soft on Syria. Turkey has this month poured around 5,000 troops, tanks, armoured personnel carriers and radar equipment into Idlib to strengthen its position in the province. Turkey has the second largest armed forces in Nato.

The Idlib fighting has driven nearly 700,000 people from their homes in the past 10 weeks and Turkey, already home to more than three million Syrian war refugees, says it cannot handle another wave of refugees.

Turkey on February 11 claimed that 51 Syrian soldiers were killed as rebels hit back against the Russian-supported government forces. Much of the latest fighting has centred on the M5 highway, a road linking the former economic hub of Aleppo to the capital Damascus in the south that the Assad regime has not controlled since 2012. Russia has officers on the ground advising the Syrians on the campaign as well as some ground forces. Russian warplanes have carried out numerous air strikes.

TASS news agency quoted the Kremlin as saying Putin and Erdogan agreed in a phone call that the sides would continue contacts on Syria. Erdogan said he discussed with Putin the “damage the [Syrian] regime and even Russia inflicted” on Turkish soldiers in Idlib.

Erdogan, meanwhile, faces claims that many of the militia fighters he has allied with in Idlib are jihadist terrorists.

US envoy for Syria, James Jeffrey, was meeting senior Turkish officials in Ankara on February 12. He said the previous day that “our Nato ally Turkey is facing a threat from Assad’s government and Russia”, adding that Washington could offer support.