EPAM, the software giant that strode out of Belarus

Arkadiy Dobkin is arguably the most successful businessman ever to emerge from post-communist Belarus. At the age of 25 he founded EPAM Systems in the Belarusian capital of Minsk in 1993, which has since grown into a global software engineering giant listed on the New York Stock Exchange and named by Forbes magazine as one of the world's top ten fastest growing technology companies in 2015. But the company's brains are still centred in Belarus where the majority of its engineers are located. Dobkin tells bne IntelliNews in an exclusive interview that with the global tech revolution still in its early stages, his business is only just getting going.

"We are just at the beginning of the transformation and it will never stop, as it is developing so fast," the CEO and president says by telephone from his headquarters in Newtown, Pennsylvania. "As one transformation wave finishes, then that will push change. As increasingly there are smart machines everywhere, I anticipate if anything this process will accelerate."

The company is thought of as an American company following its listing on the NYSE four years ago, but like many companies in Emerging Europe, while its shares are traded in the US, the bulk of its production remains in Minsk, although it is now rapidly globalising.

Dobkin was quick to get into software development at the start of the 1990s and was an unusually successful entrepreneur in a country better known as "the last dictatorship in Europe", as former US secretary of state Condoleezza Rice famously dubbed Belarus in 2005. Today, Minsk is home to the largest part of EPAM's employees: 5,500 from a total of 17,000 workers.

Business grew so fast that Dobkin persuaded the Belarusian government to set up a high-tech institute in Minsk to train more local engineers and provide a base for the company. The park was such a success that the government recently launched a similar park together with the Chinese government and is toying with the idea of building a second technology park. From this launchpad EPAM has been spreading fast. "Today we have about 6,000 people in Minsk, but we also have developers in Ukraine, Bulgaria, Hungary, Czech Republic and more recently in China and India," Dobkin says.

The market has changed rapidly over the last two decades. The cost advantage that EPAM used to enjoy from operating in Minsk has long been eaten away as competitors set up production centres in other low-cost locations like India and Central Europe. Now, though, EPAM follows its large multinational clients round the world, meeting their demand for services as they open up new markets. "Last year we bought Alliance Global Services that has offices in the US and India to complete our 24/7 development network and to support our clients that were working there. Now our international network includes offices in Hong Kong, Singapore and Australia," says Dobkin.

EPAM's clientele is now deeply international and includes some of the most famous names in retail, banking and e-commerce. "The make-up of the client list has been pretty stable in the last year with the customers roughly split between the US and Europe. In the last quarter we saw a slight uptick in the number of US clients, but that was a function of our acquisition [of AGS]. But now the European business is growing faster," says Dobkin.

Steady as she grows

The world economy may be suffering a slowdown, but the tech sector has remained relatively sheltered from the worst of the troubles. EPAM reported solid financial results for the first quarter, with revenues growing by just under a third (32%) year on year to $268mn, and it has guided for $1.15bn of revenues for the whole of 2016, broadly in line with analysts' expectations.

The company benefits from a broad diversification in all the geographies in which it works and the spread of sectors it caters to. EPAM is on the front line in the "fintech" revolution, as financial services made up just over quarter (27%) of its revenue in the first quarter of this year. But the fastest growing areas are media, entertainment, life sciences and healthcare, where revenues grew by 43% over the same period, partly helped by the acquisition of AGS.

In terms of markets, the acquisition of AGS also shifted the focus towards North America so that in terms of currency structure, most of EPAM's revenues are now in dollars (64.1%), followed by British pounds (11.0%) and euros (8.5%). These hard currency earnings depressed costs, a quarter (26%) of which are denominated in dollars, but the devaluation of the Belarusian ruble cut costs for production in Minsk, which accounted for 18.3% of the total outgoings. Costs in Ukraine (15.5%) and Russia (7.7%) were also cut by devaluations in those countries too. All this contributed to a 28% increase in Ebitda of 28%.

The company's solid revenue growth has been reflected in its share price. Over the last year, the stock price has been relatively flat, oscillating between $71-$73 per share. But the stock has performed handsomely from its IPO price of $12 on February 10, 2012, with the market capitalisation increasing five-fold. 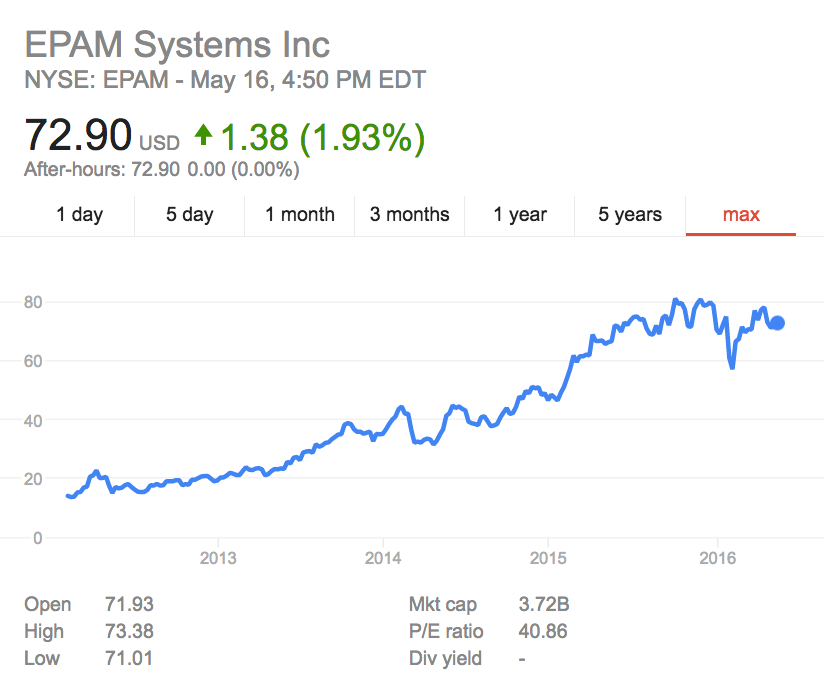 Dobkin says that EPAM's market is getting crowded and the company is facing growing competition, but he also expects to stay out in front thanks to EPAM's superior engineering skills and focus on innovation. The big consultants, such as Deloitte and Accenture, are starting to get into the same business, but EPAM has opened up an enormous lead after more than two decades. "We do complex solutions better that include user design skills that are tailored to the customers' specific needs," says Dobkin. "There is a very high demand for quality development and we need to keep up with the cutting edge technology work, as we then reapply the same solutions to other customers businesses."

And EPAM doesn't really compete with the Silicon Valley firms. Most of those focus on the maintenance of existing sites or the development of new businesses; EPAM specialises in providing new sophisticated solutions for established firms, says Dobkin, whose clients need custom-made specialist systems that meet their specific business needs. "Silicon Valley has very special production companies, but when a retailer needs an e-commerce system they can't buy a package off the shelf," says Dobkin. "We can build new systems from scratch, as the customers need to differentiate themselves from their competition."

The AGS deal brought new "special consulting skills" and "new digital engagement technology" to the company, says Dobkin, and was done to support EPAM's ability to innovate rather than for the sake of more customers or revenue. "Everyone has been impacted by the internet revolution and all these companies need to build sophisticated software and compete online to protect themselves against their competition," says Dobkin. "EPAM remains amongst the global leaders in providing these services."

The sector is now in constant revolution, the CEO emphasises. As one retail company comes up with a new innovative concept, its competitors are quick to follow, forcing another round of innovation to start as soon as the first finishes. That will keep EPAM in business for years to come, says Dobkin, who points out that revenue growth from its customers outside the top ten biggest clients is growing much faster than from within the top ten. However, even earnings from the company's biggest client, Swiss bank UBS, was up by 14.4% and increased by 15.5% for the next four largest customers.