Emerging Europe is growing faster than expected this year but will stagnate in 2023, says wiiw 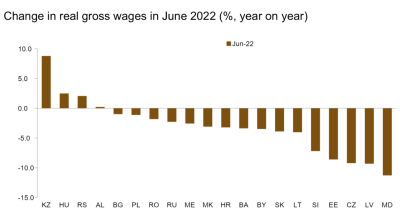 Economic growth in Emerging Europe has been more resilient than expected to the impact of the Russian invasion of Ukraine but growth is already starting to slow and will be negligible next year, according to the autumn forecast of the 23 countries in Central, Eastern and Southeastern Europe by the Vienna Institute for International Economic Studies (wiiw).

For 2022 the wiiw predicts full-year growth of 3.9% on average in the region’s EU member states, 3.1% in the Western Balkans, and 5.1% in Turkey, in upwards revisions of the forecasts in its summer forecast. Though GDP growth will still be down on that achieved in 2021, it will be above the 3.1% expected in the Eurozone.

But for 2023 the wiiw has revised its forecasts down, and overall Emerging Europe growth will average just 0.3%, barely above the  0.2% predicted for the Eurozone. The region's EU member states will average 1.4%, the Western Balkans 1.9%, and Turkey 2.5%.

“Runaway inflation is reducing real incomes and thus private consumption, which has been the most important pillar of growth up to now,” said Branimir Jovanović, lead author of the autumn forecast.  “Add to that the increasingly threatening energy crisis, a weakening German economy, big interest rate hikes and too little fiscal support from governments. So the worst is yet to come for Eastern Europe.”

The Russian economy is predicted to decline by 3.5%, an upwards revision from the 7% decline expected in the summer. The wiiw says the economy has partly adjusted to the new reality, thanks to the high energy prices, the rebalancing of trade towards Asia and increased military spending.

However, Russia's  recession will continue also in 2023, with a 3% decline, as the partial military mobilisation, EU oil embargo, the shortfall in gas exports to Europe and the Western high-tech embargo begin to have a greater impact.

“From an economic point of view, the sanctions are having an effect, albeit at a slower pace than many had expected,’ said Vasily Astrov, senior economist and Russia expert at wiiw.

For Ukraine, the wiiw predicts the country’s economy to slump by about a third (33%) compared to 2021 – an upwards revision of 5 percentage points (pp)compared to the summer. Moreover, in 2023, Ukraine could already be growing again by 5.5% – the strongest rate in the region.

“The increased inflow of foreign aid money, especially from the US, is also positive," says Olga Pindyuk, Ukraine expert at wiiw.  “Around 60% of the budget deficit is now financed with this."

In 2023, Ukraine’s budget deficit is expected to amount to around 20% of GDP.

The main risks to its forecast are to the downside, wiiw says, particularly from a possible escalation of the energy crisis.

“If gas has to be rationed in winter in some places, individual countries could slip into recession” warns Jovanović. “In the event of a harsh winter, many countries of the region will probably have serious problems covering their natural gas requirements with the volumes they have stored. And if – as seems inevitable at the moment – Germany slides into recession and large industrial plants grind to a halt because of energy shortages, then other countries – in particular Czechia, Hungary, Slovakia, Poland and some parts of the Western Balkans – will also suffer on account of their close economic ties with Germany.”

Rising inflation is the root cause of the slowing economic growth across the region. For 2022 as a whole, average inflation will be in double digits for all the 23 countries monitored except Croatia, Slovenia and Albania. For the 11 EU members in the region, it will average 13.1% for 2022 – compared to 8.5% predicted for the Eurozone – and will peak in Q4, before levelling off to  8.1% in 2023.

Inflation is running hotter in Eastern Europe than in the West because soaring food prices are a bigger part of the basket of goods used to calculate inflation. The other drivers are housing utility bills and transport fuels. For the Baltic states and most of Central Europe housing utilities are the main factor, while in the less developed countries of the Balkans, Hungary and Slovakia food is more important.

Turkey has the highest inflation in the region at an estimated average of 70.7% this year, pushed up by the  depreciation of the lira. The wiiw predicts this will fall to 26.7% in 2023.

Soaring inflation will reduce real wages, thereby compressing household consumption, which up to now has been the main driver of growth in the recovery from the COVID-19 pandemic. Only Kazakhstan, Hungary, Serbia, Albania had real wage growth y/y in June.

Consumer confidence is now lower than at the start of pandemic in early 2020.  Business sentiment is still not as depressed as then, though slowing Western European markets are hurting exports, especially for countries that are very dependent on Germany, such as North Macedonia, Czechia, Hungary, Slovakia and Poland.

Tighter monetary policy to suppress inflation is also constricting economic growth.  All central banks apart from Turkey’s have raised interest rates since the start of this year, though Russia’s regulator has since cut rates and they are now below the level at the end of 2021.

The more restrictive monetary policy has hit credit activity – which fell everywhere in real terms in August y/y everywhere apart from Slovenia, Albania, Romania, Kosovo and Kazakhstan – as well as investment. At the same time, fiscal policy is only providing modest support, especially compared to its vital impact during the pandemic, while borrowing conditions on international markets have worsened significantly.

Disbursements from the EU’s Recovery and Resilience (RRF) funds have had only a limited impact, being worth less than 1% of 2021 GDP by the end of July, except in Croatia, Romania and Slovakia. Poland and Hungary have had their RRF funds frozen because of their rule of law violations, while Bulgaria has yet to receive significant disbursements because of a failure to pass essential laws.

Below are the wiiw's GDP forecasts:

And its inflation forecasts: