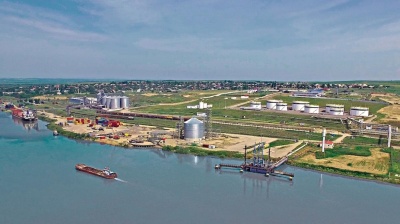 The European Bank for Reconstruction and Development (EBRD) announced that it acquired 100% of the capital of the Danube Logistics Group of companies, which includes Danube Logistics (MD), the operator of Moldova’s sole port Giurgiulesti.

After a messy ownership dispute, the port’s development under the management of a credible operator can generate significant benefits for the country’s economy. The port enjoys the status of free economic zone until 2030.

The EBRD said on May 19 that it became “the sole ultimate owner of Danube Logistics SRL”, the operator of Giurgiulesti International Free Port on May 7. The change in ownership was registered by the relevant court in Moldova on May 18, the bank also said.

The EBRD is the third owner of the Giurgiulesti port operator after Rafiq Aliyev and Thomas Moser. The former still claims the latter "stole" the port operator and instated external management at Danube Logistics to recover damages.

Privatised in 2005 under uncertain conditions by the agreement involving three entities controlled by Azeri businessman Aliev through Dutch-registered Azpetrol Oil Services Group BV, the port failed to develop in line with initial expectations. The deal thus bodes well for Moldova at a time when the country is strengthening its commitment to European integration.

However, this was contested by Aliyev, who claims that Moser, previously his employee, “stole" his company Danube Logistics SRL (at that time Azertrans) and opened lawsuits against the former EBRD banker. In a final decision in one of these lawsuits, Aliyev, through one of his companies, Retail Bemol, was awarded MDL177mn (€9mn) compensation from Moser. An external administration was then appointed by a bailiff at Danube Logistics SRL this March.

In its first statement on the issue on March 3, the EBRD said that it intended to fight a legal decision to impose external administration over the assets of Danube Logistics (MD).

The EBRD then announced in a statement on March 22 that it was “enforcing rights under its financing and security documents” with regards to the shareholding of Dutch-registered Danube Logistics Holding BV in Danube Logistics (MD).

Also on May 18, the EBRD asked for "prompt fulfilment" of 2004 agreement on Giurgiulesti port, under which Danube Logistics is entitled to get another 65 hectares of land.

“As the port’s owner the EBRD expects the prompt fulfilment of all outstanding investment obligations stipulated in the Host Investment Agreement of 2004 signed between Danube Logistics, Bemol Refinery and Bemol Retail so as to benefit and boost the economic development of Moldova,” the bank’s statement reads.

The agreement provided for 120 hectares to be given to Danube Logistics (MD) for 99 years against a symbolical annual rent of $1,000. The government, however, failed to meet its obligation and so far has extended only 55 hectares.

The controversial agreement invoked by the EBRD was prepared by former Moldovan president Igor Dodon, at that time (in 2004) an employee of the Ministry of Economy. The agreement includes many loopholes, according to investigative journalism NGO Anticoruptie.md, among others the $1,000 rent and a long series of fiscal allowances provided to the three firms.

The agreement was never made public by the Moldovan authorities, but it was leaked to media.

EBRD confirmed to bne IntelliNews that "the main still outstanding obligations are the construction of an oil refinery in the Port by Bemol Refinery and the transfer of 65 hectares of additional land by Moldova to Danube Logistics for further development of the Port.”

In total, the investments of the three companies were expected to reach around $250mn during the 25-year term of the 2004 agreement. These investments were the main reason for the substantial subsidies collected by Bemol Retail which were granted on the basis of the agreement between 2008 and 2015 by Moldova, the EBRD explained.