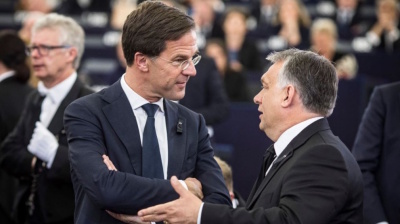 Dutch PM Mark Rutte (left) says Hungary under premier Viktor Orban (right) has no place in the EU with the anti-LGBT law.
By bne IntelliNews June 25, 2021

Hungary’s illiberal strongman Viktor Orban came in for unusually harsh criticism from European Union leaders at Thursday’s summit over his anti-LGBT regulation, with Dutch prime minister Mark Rutte telling him that he is free to leave the EU.

Local media write that two only EU leaders out of 27 stood by the Hungarian prime minister, thought to be the radical rightwing premiers of Poland and Slovenia.

The Hungarian parliament approved the anti-paedophilia law at the last session of the parliament on June 15. The law bans the portrayal of homosexuality and sex reassignment in school education material and TV programmes addressed to people under 18 years of age. Teaching sex education in schools will be limited to people approved by the government.

Human rights groups widely condemned the regulation for stigmatising LGBT people and for conflating sexual and gender diversity with paedophilia under the pretext of protecting children. Hungarian President Janos Ader signed the bill on Wednesday despite the protest.

The government argues that the law was drafted to protect children and refuses to concede that it is discriminatory against gay people.

Speaking to reporters before the summit, Orban said that the regulation stipulates that the sexual education of children is the responsibility of parents alone, adding that the law served to protect both children and parents. The prime minister said he was a "fighter for gay rights". Apparently, Orban is in minority with his views.

Dutch prime minister Mark Rutte called on Orban to read Article 50 of the EU Treaty, which says, that "any member state may decide to withdraw from the Union in accordance with its own constitutional requirements".

In a press conference, Rutte, a harsh critic of Orban’s illiberal policies, said Hungary has no place in the EU if it maintains the regulation. He said he was aware he could not push Hungary out of the EU by himself, so it had to be done step by step.

The Dutch prime minister was one of an eventual 17 EU leaders to sign a letter ahead of the summit pledging to "continue fighting against discrimination of the LGBTI community, reaffirming our defence of their fundamental rights".

The Hungarian law represents a flagrant form of discrimination based on sexual orientation, gender identity and expression and hence deserve to be condemned. Inclusion, human dignity and equality are core values of our European Union, and we cannot compromise on these principles," the countries said.

Orban did not reply to the comments on leaving the EU, and he maintained his position that the regulation had nothing to do with gay rights.

Portugal's Prime Minister Antonio Costa, who holds the six-month presidency, suggested to his Hungarian counterpart that it is possible to maintain purely trade relations with the EU, as Switzerland and Norway do, also an undisguised call for Orban to quit the EU if it fails to abide by its values.

Orban said it was "always better to read first" before reacting to a piece of legislation. In reaction to this, Luxembourg Prime Minister Xavier Bettel, who is openly gay, said he had done just that and it was "horrifying".

UN Secretary-General António Guterres did not openly condemn the law, but said: "we must absolutely oppose any effort to bring such discrimination back into our societies".