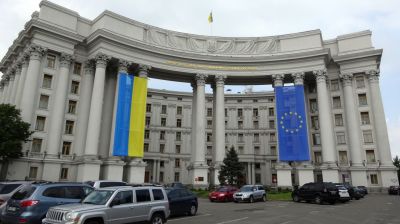 Path to agreement's ratification was “long and much harder” than the Ukrainians had imagined, says President Petro Poroshenko.
By bne IntelliNews May 30, 2017

The upper house of the Dutch parliament on May 30 ratified the free trade and association deal between the EU and Ukraine even though more than 60% of Dutch voters had rejected the trade pact with Ukraine in a non-binding referendum in April 2016.

The Senate motion followed February’s ratification of the document by the Dutch House of Representatives. To complete the procedure, the pact should be submitted to the King of the Netherlands for signing and then be officially published.

“Today’s vote in the Dutch Senate sends an important signal from the Netherlands and the entire European Union to our Ukrainian friends: Ukraine’s place is in Europe. Ukraine’s future lies with Europe,” EU Commission President Jean-Claude Juncker said in a statement.

Signed in 2014, the Association Agreement with Ukraine should help converge economic policy, legislation and regulation in areas like labour rights, visa-free movement, and exchange of information and staff in the justice sphere.

On May 30, Ukrainian President Petro Poroshenko said the path to the ratification of the agreement turned out to be “long and much harder” than the Ukrainians had imagined at the beginning of this process. “Why so? The Kremlin, contaminated by chronic anti-Ukrainian sentiment, has been hindering every our step,” Poroshenko explained. “It has used all the available resources: money, propaganda, lies, mischief-making, intelligence structures and influence groups.”

According to the Ukrainian president, which has been locked in a bitter military and trade conflict with Moscow since Russia’s seizure of Crimea in 2014, anti-European populist forces inside the EU “have been playing along using the existent bureaucratic hooks and making up new ones”.

“All this had a single purpose – to prevent ratification of the agreement, bury it and, thereby terminate Ukraine’s heading on reunification with our European family,” Poroshenko said.

“Entry into force of the Association Agreement, free trade area and visa-free regime with the EU that will start in exactly 10 days are crucially important on our way to a united Europe,” Poroshenko said, pointing out that the first year of temporary application of the trade pact led to a 24% boost in the country’s exports to the EU.

Ivanna Klympush-Tsintsadze, Ukraine’s deputy prime minister responsible for European and Euro-Atlantic integration, said on the same day that the ratification of the agreement by the Senate was “a wise and far-sighted” decision made by Dutch lawmakers. “Final ratification of [the agreement is an] important victory of progress over populism,” she tweeted.

Ukraine’s ruling Servant of the People Party's honeymoon is over after it loses ground in regional elections to local incumbents
The billionaires club, where the mega-wealthy go to meet each other
FPRI BMB Ukraine: KIIS’ survey of Ukraine’s perceptions of parties and politicians

The ruling Servant of the People (SOTP) got hammered in Ukraine’s regional elections over the weekend, where the governorships and mayor’s offices in the main towns were up for grabs.

Ukraine’s ruling Servant of the People Party's honeymoon is over after it loses ground in regional elections to local incumbents
18 hours ago
Erdogan steps up ‘Islam’ attack on Macron, calls for boycott of French products
7 hours ago
Istanbul’s mayor contracts virus as row grows over government’s “big lie” on outbreak data
15 hours ago
Tikhanovskaya’s People’s Ultimatum deadline expires, general strike due to start
1 day ago
Anger trumps fear of pandemic in Poland after abortion is banned
1 day ago