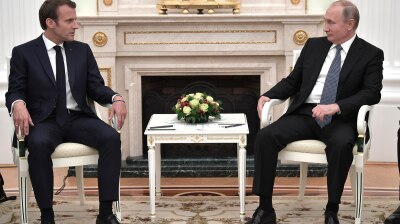 Here are some of the more baffling terms used in negotiations and what they mean. / Russian Presidential Office via Wiki Commons.
By Theo Normanton in Moscow February 11, 2022

Tensions have been building on the Ukrainian border for nearly six months, and the start of a joint military exercise between Belarus and Russia on February 10 has brought the crisis to “its most dangerous moment”, according to British Prime Minister Boris Johnson.

But those hoping to follow the events might be thrown by talk of “Finlandisation”, “the indivisibility of security”, and the “Conventional Forces Treaty”. Here’s a quick overview of the more cryptic terms you’re likely to meet when reading about Ukraine and what they mean.

The initial Minsk Protocol was signed in 2014. It committed both sides to withdraw all military equipment, release hostages and create security zones both sides of the border, but failed to prevent future fighting. Both sides accused the other of violating the ceasefire, and the Second Battle of Donetsk Airport broke out, leading to separatists securing the last part of Donetsk controlled by Ukrainian forces.

Minsk II refers to a subsequent set of agreements negotiated by the Normandy Four plus Belarus. This time, the leaders of the countries in question personally conducted the talks, rather than delegating them to diplomatic envoys.

The terms of this deal differ only slightly from the initial agreement, but they add that the state border must be returned to Ukrainian control and that Ukraine will hold local elections in separatist-held Donetsk and Luhansk, monitored by the Organisation for Security and Cooperation in Europe (OSCE).

It seems that neither side has observed the commitments made by Minsk II, and Ukraine’s Foreign Minister Dmitriy Kuleba recently insisted that “there will be no special status like that envisaged by Russia”. French President Emmanuel Macron recently described the agreements as “the only path to peace”.

On 9 February 1990, US Secretary of State James Baker famously assured Gorbachev that Nato would not expand “one inch eastward”. In the context of the conversations in which this comment was made – very early talks on German unification – the significance of these words risks being overstated.

Nonetheless, Baker appears not to have been the only statesman to have made Gorbachev such a promise: declassified documents from America’s National Security Archive show that similar assurances were made by all of the allied leaders – albeit only as verbal pledges.

Thirty years later, President of the Russian Federation Vladimir Putin feels that this promise has been broken. Nato’s open door policy means that any country wishing to join the alliance can do so as long as it meets a very stringent set of criteria and agrees to the conditions of membership.

Russia’s initial (and central) demand for de-escalation on the Ukrainian border is that Nato rules out the possibility of Ukraine ever acceding to the alliance. Neither Nato nor the USA have agreed with this condition, nor shown any willingness to discuss it. Both insist that only Ukraine can make such a decision, and the slogan “no decisions about Ukraine without Ukraine” has been a core principle of American negotiations.

Like Ukraine, Finland borders Russia, but is more closely aligned with the West. Before modern Russia came into existence, Finland achieved a relatively harmonious relationship with its outsized neighbour – the USSR – through a policy of cautious neutrality.

On his flight to Moscow for talks with Putin, French President Emmanuel Macron told reporters that “Finlandisation” of Ukraine was one of the possible routes to de-escalation (although he now denies having made the comment).

A peace treaty between Helsinki and Moscow in 1948 agreed that the Soviet Union would not invade Finland (as it had in the Winter War of 1939), but that Finland would agree not to join Nato in return.

“Finlandisation”, then, means that Ukraine would not join Nato, and would adopt a more neutral stance towards the West. This is an unlikely outcome, given the hardening of anti-Russian sentiment in Kyiv, and seeing as Nato has been publicly proclaiming since 2008 that Ukraine could theoretically join the alliance.

The Yalta deal, struck by the allies on the fringes of the Soviet Union in 1945, carved Europe up into Soviet and Western spheres of control. In the hope of securing Stalin’s support to fight Japan, President Roosevelt and Prime Minister Churchill consigned vast swathes of Eastern Europe to the Soviet sphere, and the Iron Curtain descended.

Ever since the treaty at Yalta was concluded, its signatories have been arguing over who has observed it the least.

The 1975 Helsinki conference aimed to cool down the Cold War and move the dialogue onwards. Every country in Europe, plus America, Canada and the USSR, agreed that the post-WWII status quo established in Europe was there to stay, and agreed to respect basic human rights. This was perceived as a humanitarian victory in the West, and welcomed as a territorial win in the Soviet Union.

The Helsinki accords also set up the Organisation for Security and Co-operation in Europe (OSCE) at the USSR’s request. Tasked with ensuring dialogue and overseeing arms controls, this organisation is still hosting peace talks today, although it is seen by some as underpowered.

“Indivisible security” was one of Moscow’s initial eight demands to Nato back in December 2021. It means that neither side should be able to strengthen their security to the detriment of the other side’s security interests.

Here again, we run up against the ubiquitous point on which neither side seems willing to budge: Ukraine could not join Nato while observing the principle of indivisible security.

In 2010, a meeting of the OSCE reaffirmed all members’ commitment to a “Euro-Atlantic and Eurasian security community stretching from Vancouver to Vladivostok” in which “the security of each participating State is inseparably linked to that of all others.”

Like the Helsinki accords, this declaration was not binding, but Putin considers that it commits the West to a principle of “indivisible security”, whereby no alliance of two countries can threaten a third. This remains the Kremlin’s central grievance, and the sticking point which underpins this new “hot peace”, as former US Ambassador to Russia Michael McFaul would describe it.

The Conventional Forces in Europe Agreement was negotiated in 1990, just before the collapse of the Soviet Union. It drew up concrete limits on the amount of specific types of military equipment allowed in Europe (defined as the Atlantic to the West and the Urals to the East).

The Agreement ensured that both Nato and the Warsaw Pact commanded equal numbers of weaponry, and obliged them to destroy anything munitions beyond the quotas indicated. It imposed ceilings on the numbers of troops, tanks, aircraft and artillery permitted to both sides.

In 2007, Russia suspended its participation in the Agreement. It then permanently withdrew from it in 2015.

One option for peace would be a return to an adapted form of this Agreement. Such a treaty might limit Nato and Russian forces in countries bordering one another. This seems the most likely path to peace, given Nato’s refusal to budge on the question of indivisible security and Ukraine’s rejection of an autonomous Donbas.