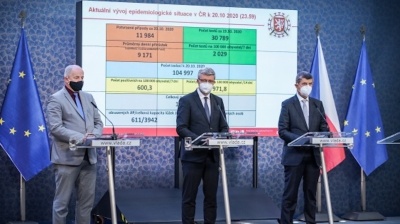 The Czech government decided to limit free movement of citizens and ordered the closure of most retailers in the country on October 21, as the fastest growth in new coronavirus (COVID-19) infections per citizen in Europe was recorded in the country in recent days.

“The increase [in cases] is huge and, unfortunately, the measures we have taken in recent weeks have not flattened the growth curve. It looks like they are not working yet," said Prime Minister Andrej Babis during the press conference on October 21.

The measures will be in effect from 6am on October 22 until the end of the state of emergency on November 3.

"This is why we have decided to take these measures, for which, of course, I apologise to everyone, because it will make life uncomfortable for businesses, employees and our citizens. I also apologise for having de facto ruled out this possibility in the past. Because I couldn't imagine it happening," Babis noted.

"Unfortunately, it has happened, and we must first and foremost protect the lives of our citizens. This is not just about the lives of those ill with COVID, it's about protecting the lives of all citizens,” he added.

Due to the record growth of infected patients, last Friday the government decided to build the first field hospital in Prague. The government ordered 2,000 hospital beds to be supplied by the Czech manufacturers Linet and Proma Reha and delivered within three weeks.

The first batch of 206 Linet beds arrived at the field hospital built in Letnany in Prague on October 21, and another almost 300 beds are to be delivered by October 23, confirmed the chairman of the State Material Reserves Administration Pavel Svagr.

In recent days the government adopted several subsidy programmes to support businesses and employers in the sectors hit the hardest by the ongoing epidemic. The most significant programmes are Covid-Rent and the employment support programme Antivirus.

Within the Covid-Rent programme companies can apply for a 50% support to pay the rent for the period from July to September. The total amount of subsidy available is €3bn. Within the Antivirus programme (Antivirus Plus) the state will cover the employers´ payroll expenses from 80% to 100%.

On October 19, the government ordered all citizens to wear facemasks outdoors and indoors. According to the findings of the Czech police and a survey by the Czech News Agency from the beginning of the week, this measure has been followed by most Czech citizens so far — but not all. When some were asked why they were not wearing facemasks outdoors, they responded they didn't know it was mandatory, while others said that wearing a facemask in places where they keep their distance from others in the fresh air does not make sense.

According to psychotherapist Adam Suchy, unlike during the first wave of the coronavirus epidemic in the spring when there was a strong sense of solidarity, people now face frustration and stress. They split into two groups, one being responsible and following the measures, the other protesting against all government restrictions and breaking mandatory measures.

Suchy stressed that the frustration is much worse now than it was in the spring. People are more upset, irritable and in a bad mood. The pandemic has been going on for over half a year and opinion on it is very fragmented, both on the part of political authorities and experts.

“All this contributes to the polarisation of society. On the one hand, we hear about dramas about health and numbers of deaths, on the other hand, about people who don't even know anyone infected, and that this issue seems artificially inflated and monotonous. People are getting tired and annoyed,” Suchy said, quoted by daily Aktualne.cz.

“In addition, we do not know whether to tune ourselves to the apocalypse or rather something we can handle. What protects us from stress is predictability and stability. And we don't experience that now,” Suchy added.

Last week, Prague police uncovered a violation of emergency measures at the underground bar in the city centre, with around 35 guests drinking, dancing and using drugs, when measures on closure of restaurants and bars applied. Bar staff had closed and locked the front doors while letting people in through a back entrance.

According to Institute of Health Information and Statistics (UZIS) data, almost 60% of those positively diagnosed were most likely infected at work. "With the growing epidemiological burden on the population, the probability of infection during normal activities of the day also increases, and often the place of infection cannot be clearly proven," said chief hygienist Jarmila Razova on the UZIS data.