Czech unemployment down to 3.5% in September 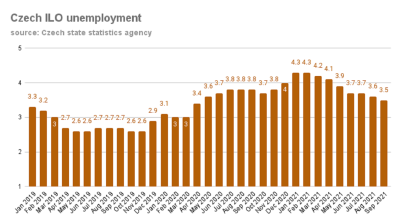 Czech unemployment in September down to 3.5% / bne InelliNews
By bne IntelliNews October 6, 2021

The Czech unemployment rate dropped to 3.5% in September from 3.6% in August, and down from 3.8% in September a year ago, stated data released by the Czech Labour Office on October 5.

"The labour market has recovered in the past month. The holidays are over and companies are hiring new employees. Employers have increased production, although they have faced shortages as a result of a lack of materials and components. There has also been a recovery in foreign employment, with cross-border workers in border areas starting work again,” commented Viktor Najmon, Director General of the Labour Office of the Czech Republic.

“As every year, a major wave of graduates arrived at the Office in September. However, it did not significantly affect the labour market," he added.

The highest unemployment was posted in the Moravian-Silesian and Usti nad Labem regions, it reached 5.3%, followed by the Karlovy Vary region with 4.5%. On the other hand, the lowest unemployment rate was seen in the Pardubice Region at 2.2%.