Czech inflation in September increases to highest level in 13 years 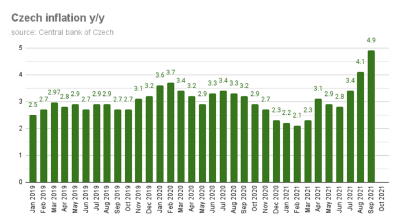 The inflation acceleration significantly exceeded the upper boundary of the tolerance band around the Czech National Bank´s (CNB) target.

“The September annual consumer price inflation figure was markedly higher than predicted by the CNB’s summer forecast, drawn up during July. The deviation of observed inflation from the forecast, which had already been visible in August, widened further in September,” said CNB Executive Director at the Monetary Department Petr Kral, adding that it was due predominantly to an unexpectedly sharp pick-up in core inflation and substantially faster growth in food prices.

Prices of goods in total and services went up by 4.4% and 5.7%, respectively.

According to Kral, the published data indicate unexpectedly strong and across-the-board inflation pressures from the domestic and foreign economy, which represent a significant inflationary risk to the CNB’s current forecast.

“The situation is evolving towards a much faster increase in interest rates than assumed in the summer forecast. The CNB has already responded to this risk by raising interest rates by three-quarters of a percentage point at the monetary policy meeting in September and will assess it comprehensively in the forthcoming autumn forecast,” he added.

Russia’s industrial output decline slows to only 0.1% in August
3 days ago
Poll shows Putin's popularity took hit in September but remained as high as 77%
3 days ago
Russia on track to have a record-smashing grain harvest
5 days ago
Bosnia posts annual CPI inflation of 16.8% y/y in August
5 days ago
IMF sees Romania’s economy growing by 4.8% in 2022, analysts are even more bullish
6 days ago