Czech holiday weekend sees a clash of demonstrations over Ukraine 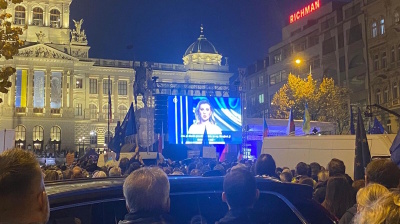 A third far-right rally in Prague's Wenceslas Square organised by pro-Russian and antivaxxer activists called again for the resignation of Prime Minister Petr Fiala’s cabinet on Friday October 28, the day of the national holiday commemorating the founding of Czechoslovakia in 1918.

But it was smaller than the previous rallies and was followed by a slightly larger demonstration “against fear” and in support of Ukraine on Sunday during which Ukraine's first lady Olena Zelenska addressed the crowd.

The comparison between the two demonstrations may indicate that liberal forces are beginning to push back against the populist forces that are trying to exploit the cost of living crisis, and that the Czech public is not yet tiring of supporting Ukraine in its defence against Russian aggresssion or the costs that this entails.

Police estimated the Friday rally was attended by the lower tens of thousands, which is lot less than the first one attended by a crowd of 70,000 which had taken many seasoned analysts by surprise. Like the subsequent “Czech Republic First” rally held on another Czech public holiday on September 28, organisers demanded Czechia take a neutral stance towards Russia, leaves Nato and the EU, and agrees new contracts for imports of cheap Russian gas.

The presidential candidate of the pro-Russian Czech Communist Party Josef Skala was collecting signatures necessary to run in the race and so was former head of the Czech energy regulator’s office Alena Vitaskova. Actor Ivan Vyskocil told the demonstrators that even after the Soviet-led invasion of Czechoslovakia in 1968 the situation had not been as bad, because “electricity power plants were ours, water was ours, breweries were ours, Skoda Auto was ours”.

The crowd that attended the Sunday demonstration in support of Ukraine was described by public media as containing several tens of thousands and police tweeted that “according to our estimate lower tens of thousands of participants” were at the square. They were addressed through a video link by  Zelenska, who thanked Czechia for supporting her country.

“As long as people around the world won’t close their eyes over the war then our light shall never be extinguished”, she said and added that Russia literally wants to “take away the light from us, to freeze us, to frighten us”, highlighting that Russia is waging a war against mothers and children.

Several Czech artists and civic leaders also addressed the crowd on Sunday and politicians from the ruling coalition parties were seen in the crowd or posted pictures from the demonstration on social media, including Senate President Milos Vystrcil and Pirate Party leader and Minister of Regional Development Ivan Bartos.

The demonstration was organised by the Million Moments for Democracy NGO, which organised the largest mass demonstration in the history of Czechia in 2019 against the rule of the then populist premier and billionaire Andrej Babis and his ANO party.   Some a quarter of a million people had attended that demonstration.