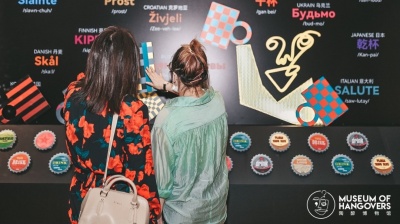 Croatia’s Museum of Hangovers announced on September 2 that it is opening its first international franchise in Shanghai, as a first step in its international expansion.

The Museum of Hangovers in Zagreb is just one of several quirky museums that have become very popular in the country. One, the Museum of Illusions, has already become a major international franchise and announced in early 2021 that it had become the biggest chain of private museums in the world. The Museum of Broken Relationships has a presence in Los Angles as well as taking its collection of mementos from failed relationships on tour internationally.

The opening of the Museum of Hangovers’ Shanghai outlet followed extensive efforts by its management to develop a franchise.

The concept was born among a group of friends, who were swapping stories of drunken misadventures when having one last drink after attending a beer fest.

As related on the museum’s website, founder Rino Dubokovic recalls that as his friend told a funny story about waking up with a bike pedal in his pocket after night out, “I thought of a great idea – a place or some sort of collection where all these objects from drunk stories (like this pedal) would be exposed together with their stories. And that is when the idea of the hangovers museum was born and came to life six months later."

The concept of the museum allows visitors to experience returning home drunk from a club to a room where they wake up in the morning, so that they can experience a night out without actually tasting alcohol.

It isn’t all fun; at the end, visitors go to an educational room where they can learn about the harmful effects of alcohol.

The Museum of Hangovers has been working on franchises since its opening in Zagreb in 2019. The Shanghai museum – covering 400 square metres on two floors of a building in the centre of the Chinese city – opened on September 3 to a select group of local influencers.

"We proudly present Museum of Hangovers in Shanghai, China. After a lot of work and effort that went into this project, we succeeded in making the first franchise of the Museum of Hangovers. The first and dearest museum was created in our native Zagreb, and now we are proud to say that we will expand our idea in other parts of the world as well," the company announced on its Facebook page on September 2.

"We can say that this is only the beginning of a worldwide expansion of the Museum of the Hangovers," it added.

The Museum of Illusions has already created an international network of franchises. In early 2021, it opened its 30th franchise, in New Delhi, to become the biggest chain of private museums in the world.

First launched in Zagreb in 2015, the museum has a huge range of optical illusions, including holograms, a room of mirrors, an ames room where the trapezoidal distort the concept of size, and various mind games and puzzles.

It quickly caught on and Museums of Illusions were opened across Croatia and internationally. It now has a presence in more than 30 cities worldwide.

The Museum of Broken Relationships, also born in Zagreb, is a crowdsourced collection of personal objects from romantic relationships that have ended.

Its website invites people to contribute their items and stories: “Recently ended a relationship? Wish to unburden the emotional load by erasing everything that reminds you of that painful experience? Don’t – one day you may regret it.

“Instead, send your item to our Museum and take part in the creation of a collective emotional history!” it says.

As well as the museum in Zagreb, there is also a museum in Los Angeles, and it has hosted dozens of temporary exhibitions in cities around the world.

What all three of these museums have in common is they rely on a concept rather than a collection of artefacts. This stood them in good stead after the earthquakes in 2020 that caused extensive damage to many of Croatia’s major museums hosting artworks and historic artefacts. Several are still closed, potentially for years.

Meanwhile, quirky new museums continue to open in Croatia. Zagreb also has the Cannabis Museum, the Chocolate Museum and the Zagreb 80’s museum with its reconstruction of daily life in the final years of Yugoslavia. Dubrovnik has the Museum of Selfie and Memories where visitors can snap selfies in a variety of settings including a golden bathroom. In Split, there is the Game of Thrones Museum celebrating the series, part of which was filmed in Croatia, as well as Froggyland, which has a collection of no less than 507 stuffed frogs.

bneGREEN: Fit for 55 – not fit for purpose
BRUEGEL: National policies to shield consumers from rising energy prices
Croatia’s PM to fire INA managers if they refuse to resign over corruption scandal

Belarus’ turn to China
11 hours ago
East and West clash in Bulgaria’s snap general election
22 hours ago
Old faces set to keep ruling Bosnia post-election
1 day ago
Georgia’s border clogged with thousands of Russians fleeing the Kremlin’s mobilisation
1 day ago
Meloni won the elections, but her programme won’t make Italy the next Hungary
1 day ago