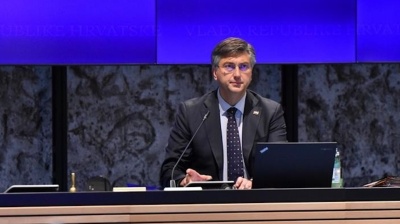 Croatian opposition parties have urged Prime Minister Andrej Plenkovic to resign after the anti-corruption body, USKOK, charged four of his ex-ministers for corruption.

Investigations into the four ministers – Darko Horvat, Boris Milosevic, Tomislav Tolusic and Josip Aladrovic – were launched earlier this year. Horvat was arrested while he was a minister. Plenkovic dismissed him immediately.

The opposition claimed the charges – the first on such a scale against ministers from a ruling majority – are an "unprecedented scandal" that requires not only Plenkovic’s resignation but also an early election.

“I cannot remember anything like this happening in any of the normal, well-organised European countries. This absolutely sets a precedent because four ministers have been indicted in a single day for a joint criminal enterprise. And they are not the only ones,” the leader of the opposition Social Democratic Party (SDP) Pedja Grbin said as quoted by N1.

“Corruption is happening too often and that simply cannot be accidental. Corruption is the only system in this government that functions,” Grbin added.

Sandra Bencic of the Green-Left Bloc said the fact that the indictment was filed against two ministers and a deputy prime minister who were in office when they were arrested can be seen as accusation of corruption against the whole government.

She said that in “modern, normal democracies” such a government could not survive.

Horvat was detained in February, but the other seven people suspected in the case have not been detained so far. He is accused of illegally allocating HRK2.6mn (€345,000) in 2018, while serving as economy minister in Plenkovic’s previous government. Mandac, Milosevic, Tolusic, Zunac and Miskovic are also suspects in the same case.

A second investigation was launched during the first probe, into former labour minister Josip Aladrovic who is charged with corruption in two recruitment procedures in 2018 and in 2019, when he was the head of the state pension service HZMO. In July 2019, Aladrovic became minister but was removed after the launch of the probe in 2022.

Nikola Grmoja of the conservative populist Most party said that it was incredible that within 24 hours a former MP of Plenkovic’s ruling HDZ, Vinko Zulim, was arrested and four former ministers, of whom two are incumbent MPs, were indicted.

The opposition intends to push further for Plenkovic’s government to resign and Grmoja forecast anti-government protests.