COMMENT: The art of the dodgy deal — freeports, fine art and the Azerbaijani Laundromat 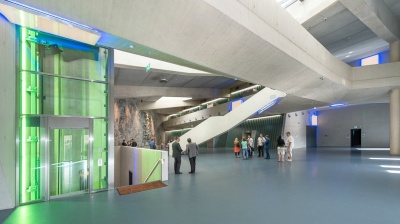 Following last year’s revelations that several member states of the Council of Europe have been involved in large-scale money-laundering operations, the institution’s parliamentary assembly (PACE) has been scrambling to rebuild credibility. To that end, a recent April resolution urging member states to take a harder line against money laundering and corruption could not have come at a better time. Prompted by a report by Dutch member Mart van de Ven, the text calls for the creation of a Europol Joint Investigation team (JIT) to investigate transnational money laundering networks.

Indeed, as one of Europe’s foremost human rights-centric organisations, the council is particularly pressed for action after it had to expel 13 PACE members for alleged financial ties to the Azerbaijani Laundromat scandal last year. MPs were cut cheques in exchange for rubber stamping Azerbaijan’s elections as “free and fair”.

With PACE a human rights watchdog and Azerbaijan a human rights offender, the council had to take a stand. And while the JIT would provide law enforcement with a powerful new tool, it remains to be seen how successful this effort can be while countries like Azerbaijan still have plenty of friends in Europe. As revelations keep trickling in about the extent of the Azeri domino — with the latest chip to fall tying together controversial Azeri figures, Swiss art dealers and Luxembourg officials close to European Commission President Jean-Claude Juncker — it’s clear that the COE’s problem can’t just be wished away by setting up more committees.

In September 2017, a massive leak exposed an almost three-billion-dollar slush fund used by the Azerbaijani government to bribe a series of individuals, including European politicians from Germany, Belgium, Italy and Spain with a stake in human rights — a sore topic for Baku. Known as the “Azerbaijani Laundromat”, a counterpart to the “Russian Laundromat”, it sparked a trans-continental investigation spearheaded by the Organized Crime and Corruption Reporting Project (OCCRP) alongside multiple local news outfits.

Alongside many Azerbaijani officials, European and US companies seemed to have had a hand in the undertaking as well. Most damning, however, was the involvement of European PACE members in the scandal. The laundromat revelations were an incredible embarrassment to the institution, already under fire for turning a blind eye to Azerbaijan’s appalling human rights record and history of rigged elections.

If the European Commission stayed out of the scandal at first, the involvement of delegates from EU member states forced Brussels to change tack. An independent report also revealed more damning details about the affair, sparking debates about how to rein in corruption in the EU itself. Concerned about “the level of oversight and governance” displayed by some EU member states, the EU Commission planned for more restrictive money laundering controls in October 2018.

The latest revelation in the laundromat saga should be even more worrisome for EU officials, as it ties together suspicious art dealers with people from Jean-Claude Juncker’s entourage through the emergence of so-called freeports. Pioneered by the Swiss art dealer Yves Bouvier, freeports are massive, neighbourhood sized warehouses that are often used by the wealthy to store heirlooms, precious stones, fine art and other valuables. Freeports are built in tax-free zones, and since anything can be locked up in freeports indefinitely beyond the reach of tax authorities, they have become hubs for art collectors — and for money launderers and corrupt politicians as well.

Yves Bouvier was crucial to the spread of freeports around the world: other than owning the Geneva Freeport and Le Freeport in Luxembourg, Bouvier also has a facility in Singapore. His sprawling business empire, however, took a hit in recent years, after Bouvier was sued by former clients for alleged art fraud in excess of $1bn, as well as of stealing artworks and dodging some $165mn in taxes in Switzerland.

Owing to their opacity and secrecy, freeports are an ideal way to take or deliver bribes. According to the European Parliament’s Research Service (EPRS), they are often used as offshore bank accounts that can be anonymously used for financial transactions. Europe’s freeports in Geneva and Luxembourg are named as hubs of potential illegal activities and bribery. And not surprisingly, mounting evidence suggests that several Azerbaijanis linked to the Laundromat are mixed up with financial scandals involving the freeports.

The most relevant example is the long-running business relationship between Philippe Dauvergne, a former high-ranking French customs official turned CEO of Le Freeport Luxembourg, and Khagani Bashirov, an Azeri with ties to one of the ringleaders of the laundromat. The two men partnered in more than a dozen companies over the years, and while there are no reports of that relationship extending to the freeport, Dauvergne’s proximity to the Laundromat scandal doesn’t do any services to the free trade zone.

Both the EC and the CoE are naturally eager to untangle these complex webs ensnaring the latter’s members and the former’s commitment to fight against money laundering. The problem is that this goal is not equally shared across the board: while the CoE is rattling sabres, opposition comes from the EU’s executive arm, the European Commission.

Indeed, its higher ups seem to be treating the situation quite lightly. Both Juncker and Economic Commissioner Pierre Moscovici have recently dismissed a proposal to phase out free zones because of their role in corruption, while there has been little movement on the plan to strengthen regulation against financial crimes.

Against this complicated backdrop, the CoE’s recent initiatives to kick start a European anti money laundering Europol task force may not amount to much. Unless the future Commission (the next Commission is due to take office in November) throws its weight firmly behind such proposals and agrees to punish strategic allies like Azerbaijan irrespective of the political costs involved, laundromat-like schemes will keep surfacing.

Russia seeks ‘new Mariupol’ in the Donbas
1 day ago
EU’s credibility on the line over enlargement
1 day ago
Explainer | Why Tajikistan’s Pamiris don’t trust their government
2 days ago
Meet the latest Russian tycoon to be promoted to the Premier League
2 days ago
Ruble falls to below RUB60/$1, putting pressure on the Russian budget in 2022
3 days ago