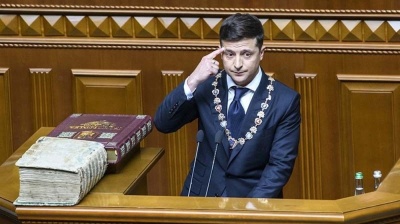 President Volodymyr Zelenskiy is facing the greatest political and constitutional crisis since the end of the Revolution of Dignity
By Robert Homans in Washington DC November 3, 2020

Recent decisions handed down by Ukraine’s Constitutional Court have presented Ukraine, and President Volodymyr Zelenskiy, the greatest political and constitutional crisis since the end of the Revolution of Dignity, and the Russian invasion and occupation of Crimea and the invasion of the Donbas in 2014.

Since the election of Zelenskiy last year Ukrainian voters, 73% of whom voted for him, most of them in the hope that he would tackle pervasive corruption that exists at all levels of Ukraine’s government, have seen their hopes shredded.  Perhaps the recent Court decisions, and Zelenskiy’s reaction to them, represent an opportunity to re-focus on the task of tackling endemic corruption.

On October 27 Ukraine’s Constitutional Court, the sole body allowed to interpret Ukraine’s Constitution, and where members of Parliament file actions to overturn laws they oppose, voted to strip the National Agency on Corruption Prevention (NACP) of its authority to require public officials to make annual electronic asset declarations and, in addition, struck down a law that makes filing false declarations a criminal offense.  The petitioners were several Members of Parliament belonging to factions considered to be pro-Russian that is headed by Viktor Medvedchuk, the head of the Political Council of the Opposition Platform, For Life Party .

President Zelenskiy, in an op-ed in Sunday’s Financial Times, stated that this ruling, plus another recent ruling concerning the legitimacy of the leadership of the National Anti-Corruption Bureau (NABU), “are part of a systematic effort to undermine the rule of law, push back against the progress made in our fight against corruption, weaken our society and economy and, last but not least, stop Ukraine’s Euro-Atlantic integration.”

Based on his actions since becoming President, Zelenskiy seems to be coming late to the threat he now articulates.  Since naming a largely reformist government in July 2019, Zelenskiy has:

In other words, Zelenskiy has spent most of his time in office effectively acting on behalf of Kolomoisky and possibly Medvedchuk, by dismantling the reform institutions that it has taken Ukraine several years to establish, institutions that Zelenskiy claimed to support at the time, and now claims to support once again. Partly as a result, during his time in office Zelenskiy has experienced declining popular support and, last October 25, SOTP experienced disappointing results in local elections that were held throughout Ukraine.

Whether it is his declining popular support, recent election reversals, or the shock of the recent rulings by the Constitutional Court, Zelenskiy seems to have had a sudden epiphany.  In his Financial Times op-ed, he called the Constitutional Court a “Kangaroo Court,” further stating that the petitioners in these cases, “is a coalition of Russian proxies and some prominent Ukrainian oligarchs who feel threatened by the activities of our anti-corruption institutions. They oppose EU and Nato integration, Ukraine’s co-operation with the IMF and a rule-based society that would benefit the 99%, not just the 1%.” I assume that the “prominent Ukrainian oligarchs” Zelenskiy refers to includes his former patron, Kolomoisky.

Ever since Ukraine’s independence the Judiciary has been the most significant barrier against Ukraine achieving the complete rule of law, primarily because, in Ukraine the Judiciary answers to the President and the Prosecutor General, a system that largely goes back to Tsar Peter I. The fear is that any effort to reform the Constitutional Court, by forcibly removing judges for example, without reforming the underlying judicial system, will be doomed to failure.

In February 2010 newly elected President Yanukovych returned the favour. He got 28 members of Prime Minister Tymoshenko’s Party to switch sides, plus several members from Yushchenko’s Party, and he then proceeded to force through a successful no-confidence vote against Tymoshenko.

There are other important cases on the docket of the Constitutional Court.  As the Kyiv Post recently reported one pending case, to be heard this week, could result in the dissolution of Ukraine’s Deposit Guarantee Fund. Working much like the Federal Deposit Insurance Corporation in the United States, the Deposit Guarantee Fund has the responsibility of guaranteeing deposits in Ukraine’s banks, with the near certainty that a major banking crisis would follow any ruling against the Deposit Guarantee Fund.  Such a ruling could also force Ukraine to compensate owners of the 90+ banks that were shut down by the NBU or, like Kolomoisky’s PrivatBank, were taken over.

Other cases pending before the Constitutional Court include recent legislation allowing for limited sales of agricultural land and reform of Ukraine’s healthcare system.  The potential damage to Ukraine, and its anti-corruption drive, cannot be over-stated.

There have been several proposals on how to solve the damage that the Constitutional Court is doing to Ukraine’s progress toward achieving the Rule of Law, none of them good.

The options are extensively summarized in an article prepared by the Anti-Corruption Action Centre (AnTac) of Ukraine.  The least risky, in terms of potentially upsetting Constitutional and judicial norms, would be replacing judges through the completion of their terms, along with voluntary resignations.  However, this alternative would take time for its desired effect to be felt.  Also, as the AnTac article points out, judges who resign can later petition to be re-instated, on the grounds that they were forced to resign.

1) declare the CCU’s decision of October 27 null and void;

2) automatic restore all abolished legislation, including provisions on criminal liability;

4) start the process to select new CCU judges by the appointing authorities.

According to AnTac Draft Law 4288 is, as written, deeply flawed, because:

·      The current system of electing new judges would remain intact.

·      There is no assurance that Draft Law 4288 would have sufficient support in Parliament.

·      If passed and signed by the President, Draft Law 4288 would likely be declared unconstitutional by the same Constitutional Court judges whom the Law attempts to replace.

Perhaps Zelenskiy feels as if he has come to edge of the abyss. He looks over the edge, and he sees the risk of Ukraine becoming a large trough, from which oligarchs will feed. In turn, Ukraine’s becoming an oligarchic fiefdom will mean that the leadership of the Russian Federation would no longer be threatened by the likelihood of Ukraine becoming an example to Russians of a country on Russia’s doorstep living under the rule of law.

Privatisation efforts in Uzbekistan are moving to a practical level. The newly appointed State Asset Management Agency head has started to implement the presidential decree on privatisation with a new zeal.

It has been an exceptional month for commodity markets, with growing inflation expectations increasing investor interest in the assets. Meanwhile, fundamental developments, particularly in the oil market, have only provided a further boost.

COMMENT: OPEC+ puts off production cut decision for a month
14 hours ago
COMMENT: Uzbek privatisation - this time it seems to be for real
16 hours ago
ING: Commodity supercycle calls grow
1 day ago
FPRI BMB Ukraine: The US takes on Kolomoisky
2 days ago
ING: Turkey’s inflation remains on an upward path
3 days ago