COMMENT: Russia’s central bank – giving credit where credit is due 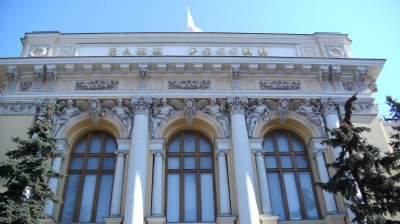 Central Bank of Russia's Moscow HQ. / Photo by CC
By Chris Miller of Yale University May 16, 2016

As the ruble crashed at the end of 2014 and Western sanctions hit some of Russia’s largest and most indebted firms, some analysts predicted the country was headed toward a credit crunch. In fact, Russia’s total stock of foreign debt actually fell by nearly 30% over the subsquent two years.

Although preliminary data showed the external debt stock rose slightly in the first quarter of 2016, the rapid but relatively painless decrease in Russia’s external debt burden is an unsung success story, especially for the Central Bank of Russia (CBR). Unlike many countries with large foreign borrowing, Russia’s problem was not external government debt, which totals just $30bn. As a share of GDP it is less than 16%, which is far less than most emerging markets, to say nothing of peripheral European countries.

Russia’s private sector, however, has borrowed heavily from foreigners, with the volume of external loans to Russia’s private sector growing from around $100bn in 2004 to $659bn by mid-2014. Nearly a third of this went to Russian banks, which had a profitable business for most of the last decade by borrowing money abroad at low interest rates, lending it within Russia at higher rates, and pocketing the spread.

The second major driver of external debt was Russia’s state-owned firms, especially those in the energy sector. Gazprom, for example, has over $22bn in outstanding bonds denominated in foreign currency, primarily in dollars and euros. Rosneft entered the current crisis having just spent $55bn buying TNK-BP in 2013, leaving it heavily levered.

In 2014, Rosneft faced the greatest difficulty in servicing its debt. According to Moody’s Investors Service, Rosneft had to repay or refinance $26.2bn between mid-2014 and the end of 2015. It had traditionally relied on Western investors to finance its expansion, and so long as oil prices were high, investors were happy to lend at low rates. But after sanctions were imposed on Russia, Western financial markets were closed off and Rosneft struggled to find other financing options. In the end, it refinanced only with help from the central bank, which agreed to accept newly-issued Rosneft bonds as collateral, allowing domestic Russian banks to buy the bonds. That manoeuvre took the pressure off Rosneft, though the lack of transparency spooked markets and drove down the ruble.

Energy companies were hard hit by the crisis, but they had one advantage over other firms: their production is priced in dollars, so they weren’t hit by the ruble’s devaluation from the end of 2014. Instead, they benefited from the cheaper ruble, which reduced the dollar value of their production costs. Russia’s banks, by contrast, were among the greatest losers from the devaluation. Their revenues are ruble denominated, so repaying foreign-currency denominated debt became more expensive in relative terms as the ruble fell to half its previous value against the dollar. The devaluation also hit bank profits by placing pressure on their clients’ ability to repay loans, further squeezing profits. On top of this, several of the biggest banks were placed under Western sanctions.

This is one reason that banks have led the way in paying down their external debt. Banking sector external borrowing has decreased by 38% since 2014, down to $129bn. External debt owed by non-financial firms is down by over $100bn since 2014, a decrease of nearly 20%.

How did Russia manage to deleverage so rapidly without a credit crunch? One key reason was the country’s central bank, which ensured that credit was available to reputable borrowers. In November 2014 the CBR introduced its 12-month repo programme, which provided year-long dollar loans to Russia’s banks. That gave banks the ability to refinance dollar-denominated debt, crucial if Russia’s banking system was to replace external sources of lending to Russian firms. Several Russian banks, such as Otkritie, have expanded over the past two years by taking advantage of this business.

Not all the steps that Russia’s government took to deal with the liquidity crisis were positive. The 2014 Rosneft transaction stands out as particularly poorly designed, though the central bank likely came under political pressure to do the deal. Overall, though, the CBR has taken steps to limit the potential downside of its liquidity provision. The main risk to this type of programme is that the central bank is left holding obligations from banks that go bust. CBR governor Elvira Nabiullina, however, has coupled expanded liquidity with an aggressive campaign to shut down poorly managed banks, thereby limiting the chance that Russian taxpayers will be on the hook for bad debts.

The decline in external debt is not, of course, all good news. In the past, rapid influxes of foreign capital were evidence that investors expected significant growth. Today, reduced borrowing and lending is a sign that both Russians and foreigners lack confidence in Russia’s prospects. But the rapid fall in Russia’s external debt burden could have been much worse had it not been for the central bank’s efforts. Rarely do countries deleverage so rapidly with so little financial chaos.

Chris Miller is Associate Director of the Program in Grand Strategy at Yale University. Follow him on twitter @crmiller1

NEMETHY: Where are US markets? Where are they heading?
EU opens loophole for Russian gas-for-rubles scheme
PPF agrees to sell Russian banking assets

COMMENT: Sanctions are working, but the West risks isolating Russian reformers instead of galvanising them
19 hours ago
NEMETHY: Where are US markets? Where are they heading?
21 hours ago
COMMENT: Constanta concerns
7 days ago
Sberbank faces a meltdown from its vast commercial real estate loan book
9 days ago
STOLYPIN: The sick man of Europe
10 days ago