COMMENT: Iran's one hand unbound in the South Caucasus 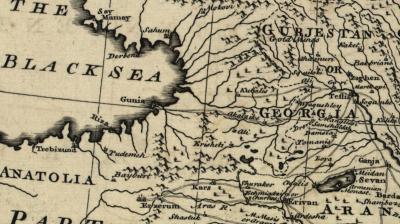 Nowadays, building economic corridors reaching to the Black Sea is a challenge for Iran. Gone are the heydays of the Persian Empire (portion of map largely shows Georgia in 1747 at the time of Iran's Afsharid Dynasty).
By Emil Avdaliani in Tbilisi March 5, 2018

Since nuclear sanctions imposed against Tehran were lifted by Western powers at the start of 2016, Iran has been working to increase its sphere of economic influence around its borders. Under Donald Trump, the US has only increased pressure on Iran, scaring off foreign investors. However, this does not preclude the Iranians from pursuing economic prospects across the lands of the South Caucasus.

The region is one of the most susceptible to Iranian economic influence because of the close historical and cultural contacts Iran shares with Armenia, Azerbaijan and Georgia, and Tehran’s steady aim has been to get involved in large infrastructure projects and expand trade contacts with the trio to reach through to Georgia’s Black Sea coast. Despite the numerous obstacles, Tehran has managed to obtain a foothold by the sea, for example near the city of Supsa in western Georgia. But the going is not simple, for Tehran must always contend with its traditional rival, Russia. Moscow, it is clear, obstructs any Iranian moves to establish Russian-influence-free pipelines or railways running to Armenia, Azerbaijan and Georgia.

Nevertheless, both countries will always find common ground to work together to block Western-led East-West infrastructure projects spanning from the Caspian Sea to the Black Sea. Another common interest is to avoid any Western foreign military presence in the region, particularly in Georgia, while Moscow and Tehran also closely watch how successfully the EU expands its influence in the region and both work to limit that going too far. Some cooperation between Moscow and Tehran is seen in dealing with the Nagorno-Karabakh breakaway region, an intractable headache that any day of the week can threaten fresh military conflict between Armenia and Azerbaijan, but the Kremlin remains careful not to allow Tehran to gain too big an influence in the conflict resolution process.

Ambitions constrained
Throughout the centuries Iran has been a regional power. Powerful Iranian dynasties such as the Achaemenids, the Sasanians (whose empire was the last period of the Persian Empire before the rise of Islam) and the Safavids and Kajars, particularly around the 16th to 18th centuries, always aspired to achieve a major role in the Middle East, South Caucasus or southern parts of modern Central Asia. But during the Cold War decades, followed by the years of sanctions imposed by Western countries against Tehran’s nuclear program, Iran was constrained in projecting its economic and political influence in these regions.

Now, with the sanctions officially lifted since 2016 got under way, and despite the worrying rhetoric—the Trump administration is not going to reverse the Iran nuclear deal in the near future—Iran now sees avenues for projecting its economic and political clout in its neighbourhood and in particular in the South Caucasus region.

One of Iran’s foreign policy imperatives is to increase its gas exports and trade relations with Europe. There are opportunities for this cooperation as the EU remains worried about Russian predominance on the European gas market. Iranian gas could be a very good tool with which to assuage European fears, but to export its gas Iran would need Black Sea ports such as Batumi and Poti in Georgia.

To this end, Iranian officials often meet their Georgian counterparts to discuss trade corridors. Tehran has also numerous times expressed its willingness to use the Trans-Anatolian Gas Pipeline (TANAP) and the Trans-Adriatic Pipeline (TAP), which along with the South Caucasus Pipeline through Georgia are to make up the Azerbaijan-to-Europe Southern Gas Corridor (SGC). Moreover, the Islamic Republic intends to drive up its trade with the South Caucasus countries. For example, it has been stated on several occasions that annual trade with Georgia, Armenia and Azerbaijan is seen growing from approximately $1bn to more than $2.5bn.

However, despite some milestones of success there are significant constraints which Iran will continue facing in the South Caucasus simply because Russia and Turkey are both well represented both militarily and economically in the region. Russia for instance successfully obstructs any Iranian moves towards establishing independent/new pipelines or railways to Armenia and Georgia. As a reflection of this, when there were talks several years ago on building a large-scale transit gas pipeline from Iran through Armenian territory to Georgia, Moscow was quick to block the move on behalf of the Armenian government. The Kremlin even bought the majority of shares in the existing Armenia-Iran transit pipeline to effectively forestall any further initiatives on that front.

Tehran and Yerevan also held talks on the construction of a $3.7bn railway to run through Armenia to Georgia’s Black Sea coast. However here too the project stalled as difficulties in securing financing arose. The reality here is that Russia owns most of Armenia’s railway infrastructure and as a result can block any pro-Iranian initiative. Another factor is that neighbouring Azerbaijan already has the necessary pipeline infrastructure and the Baku-Tbilisi-Kars railway, launched last October, will only strengthen Iran’s willingness to take the Azerbaijan route.

Another area of influence for Iran in the South Caucasus could be the ever simmering Nagorno-Karabakh conflict. In the early 1990s, there were some unsuccessful attempts by the Iranian government to mediate the conflict. Since both Armenia and Azerbaijan border Iran it is quite natural to expect Tehran to try to play a bigger role in defusing the dispute. Russia, however, still a dominant power in the conflict resolution process, would be opposed to any Iranian initiatives that might diminish Moscow’s role.

There is also a purely military aspect to the Russo-Iranian competition. Russia remains the big military power in the region with active military bases in Armenia, Abkhazia and South Ossetia as well as total control of strategic Caucasus mountain passes. This in turn further limits Iran’s regional ambitions.

Cooperation on the North-South axis
Despite the differences over exercising influence in the South Caucasus, Russia and Iran have shown they can cooperate too. Economics is one side to this. As an example, you can take the North-South trading corridor to the benefit of which Moscow and Tehran cooperate along with Baku.

Another area of ready cooperation is seen in Moscow and Tehran’s willingness to obstruct Nato/US/EU presences in the region. Both the Iranians and Russians also loath Turkish influence in the South Caucasus and the growing military cooperation between Ankara, Tbilisi and Baku. A similar concern is the expansion of NATO, primarily when it comes to Georgia’s ambitions.

Russian thinking aligns fully with that of the Iranians. Both fear western encroachment. Tehran and Moscow are even worried that the EU might eventually engulf all of the South Caucasus states. Indeed, with Georgia already an EU association partner, Brussels is expecting to sign similar agreements with Baku and Yerevan later this year. That would mean that Iran’s entire northern border would be more or less associated with Europe and the only reliable partner to work with would be Russia.

No open goals
To recap, while the lifting of the nuclear sanctions against Iran certainly helps the country enjoy a freer hand in asserting itself economically and politically in the South Caucasus, it must always reckon with substantial competition from Russia. There are no open goals. Moscow will remain the dominant military player in the region while any major Iranian infrastructure project can always get entangled in rival Russian considerations. Russia will also use all of its influence in maintaining its resistance to any bigger role for Tehran in addressing the Nagorno-Karabakh conflict between Armenia and Azerbaijan.

Still, despite the differences, there remains ground for Iranian-Russian cooperation in areas such as preventing Western military inroads and heading off potential Western-led infrastructure projects in favour of their North-South aspirations.

Russia's exceptionally strong current account surplus helped the ruble outperform its peer currencies in 3Q21 and is likely to keep doing so in 4Q21. As a result, we see USDRUB appreciating to 70.0-71.0 in the coming month.

STOLYPIN: It isn’t the ‘Usual Suspect' who is really 'weaponising gas'

That naughty Vladimir Putin is up to his tricks again. Not weaponising football hooligans or COVID vaccines this time, but gas. Politicians are queuing up to blame Russia. The trouble is, this is not just bad analysis but also bad politics.