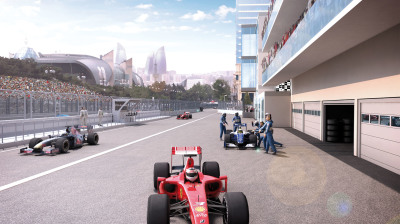 The costs of the second Baku Formula One race are not in the 2017 budget.
By bne IntelliNews December 23, 2016

2016 has not been an easy year for oil-rich Azerbaijan. The steep depreciation of the manat in December 2015 led to double-digit price inflation, bank closures, street protests, and an almost 4% economic contraction. But, judging by the government's budget for 2017, the lessons of this year of crisis have already been forgotten.

The 2017 budget, passed by parliament on December 16, shows the same misguided priorities and lack of transparency that have plagued state budgeting in previous years. Due to a shortfall in budget revenues from oil and gas exports, public spending will be cut by 8.6% y/y to AZN16.9bn (€9bn) next year. Also, unlike in the years of oil bonanza when Baku posted surpluses of billions of dollars, 2017 will see the budget go into a deficit of 1% of GDP, or AZN645mn.

But not all sectors will suffer the blow of spending cuts. One of the largest spending categories in 2017 will continue to be "other expenses", a category that Baku has traditionally used to conceal expenses it did not want to make public. The budget for this category will increase by 67.2% y/y to AZN2.07bn, an astounding 12.3% of total spending.

Meanwhile, defence spending will decrease by 27.5% y/y to AZN1.6, but will still account for a staggering 9.5% of total spending. In past years, Azerbaijan has allocated more than double that amount to defence, but continuing to spend astronomical sums on arms even as living standards in the country have plummeted seems reckless.

Azerbaijan has improved its military capabilities in recent years by purchasing some $4bn worth of armament from Russia and $5bn from Israel. The spending has ostensibly been prompted by the threat of a war with neighbouring Armenia, with which the country has been in conflict since the late 1980s over the breakaway region of Nagorno-Karabakh and seven surrounding territories. But Baku's militarisation is a (costly) strategy to force Armenia into surrendering the territories peacefully rather than a genuine concern for its security.

For the better part of the last decade, Azerbaijan's defence spending has exceeded that of poorer Armenia by tenfold or more. Whenever Armenia buys military equipment - as it did earlier this year using a $200mn loan from Russia - Azerbaijan responds with a show of force. In December, it surfaced that Baku would purchase an Iron Dome anti-missile system from Israel, which is expected to cost billions depending on how many batteries it decides to buy.

But, with both sides refusing to budge, peace negotiations continue to be fruitless. And beating Yerevan at an arms race has yet to prove an effective strategy for Azerbaijan at the negotiations table. No diplomatic progress has been made since the two sides signed a ceasefire in 1994, despite frequent negotiations mediated by the Organisation for Security and Cooperation in Europe (OSCE).

In addition to arms, another costly pastime of Baku's has been that of hosting high-profile international sporting events. Building on its track record of hosting billion-dollar sporting events like the first edition of the European Games in 2015, Baku is slated to host the Islamic Solidarity Games and the second edition of a Formula 1 race next year. But the costs of these two competitions are not clearly reflected in the books. Baku appears to have allocated some AZN211.7mn to the former, but the latter is absent from the budget altogether.  Furthermore, the budget for the sports ministry was slashed by some 91.3% y/y to AZN38.6mn, meaning that the spending for both events will likely come out of the "other expenses" kitty. Besides, some reports place the spending for the Islamic Solidarity Games at AZN1.3bn, meaning that the difference will likely also have to come from "other expenses".

Meanwhile, law enforcement will receive a 2.1% y/y increase in budget to AZN1.23bn. That 7.3% of budget spending, a figure three times higher than the European average, is allocated to law enforcement is reflective of Baku's fixation with maintaining public order at any cost, even in times of economic crisis.

Healthcare, a sector in which the government has traditionally underspent, will see its budget slashed by 6% y/y to AZN775.8mn. Only 43% of that amount will go to the poorly equipped public hospitals. Azerbaijanis with means normally travel to Turkey for medical services, so the cut in healthcare spending will likely affect those with limited resources. Education, another sector that has remained underdeveloped, will fare better next year, as it is one of the few sectors that will receive an increase in budget - 1.6% y/y to AZN1.86bn.

However, social spending will receive a 21.5% y/y budget cut to AZN2.1bn, despite the fact that the government increased pensions and other social benefits in 2016 to stave off a wave of popular demonstrations over plunging living standards in January.

But the biggest decline in next year's spending will be a 37.8% contraction in infrastructure and construction spending to AZN1.8bn. The government accounts for 70% of investment in the Azerbaijani economy. When public spending is cut, as it was in 2016, the economy, and particularly the non-oil economy, contract. Case in point, the non-oil economy contracted by 5.6% y/y in January-November, at a faster rate than the overall economy, which declined by 3.9%.

Seeing how diversifying the economy away from oil and gas is the government's primary goal if one listens to speeches by cabinet ministers and President Ilham Aliyev himself, just exactly how this goal would be achieved while cutting investment spending remains a source of speculation.

Furthermore, the 2017 budget calls into question the veracity of a $27bn anti-crisis plan that the government made public in December, and which it said would fund largely from the state budget. Drafted with the support of consultancy McKinsey, the 120-page document sets ambitious goals for the development of 12 economic sectors between 2017 and 2020, ranging from heavy industry to financial markets. But there is no sign of the investments in the 2017 state budget, which had already been drafted by the time the development plan was ready anyway.

A closer look at Azerbaijan's 2017 state budget raises more questions than it answers. Until Baku is ready to be more transparent and coherent about its deployment of state funds, official speeches about economic diversification are likely to remain lip service paid to reassure the electorate that officials are doing something to improve their living standards.

As is, the targets set out in the 2017 budget may not even be met, for Finance Minister Samir Sharifov himself said that "the government does not exclude problems with meeting" it in a speech to parliament. If oil prices drop below the $40 a barrel Baku used as a reference price to draft the budget, "the government does not rule out a further reduction of expenditures", he added. If that happens, the 1% GDP growth forecast for next year will likely turn into another contraction. (Baku anticipated GDP growth of 1.6% for 2016 in its budget for this year).

A real economic recovery in Azerbaijan is not expected until 2018-2019, when the country's large-scale Shah Deniz II gas project will come online and gas exports to southern Europe begin. Despite all the talk and grandiose plans to diversify the economy, Baku's economic destiny will likely remain tied to oil and gas for the foreseeable future.

CAUCASUS BLOG : What can Biden offer the Caucasus and Stans, all but forgotten about by Trump?
CAUCASUS BLOG: The long and illegal road to Stepanakert
CAUCASUS BLOG: Dismay as Armenia’s colour revolution PM Pashinian congratulates Lukashenko