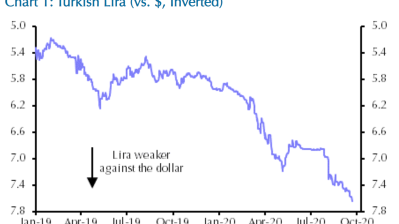 As the Turkish lira continued to find new record lows on September 23, Capital Economics informed investors it now expects the beleaguered currency to be at 8.00 to the dollar by the end of this year and 9.25 by end-2021, updating its previous forecasts of 7.50 and 8.25, respectively.

“The risks are clearly skewed towards even larger and more abrupt falls in the lira in the near-term as well as aggressive hikes to policy rates. We warned in a recent Focus that the chances of another currency crisis [following the August 2018 crisis] have increased markedly. In May, only some last-minute financing [for Turkey] from Qatar prevented such an outcome,” Jason Tuvey at Capital said in a note.

Tuvey added that “the risks lie firmly towards more abrupt falls in the lira in the near-term that ultimately force the central bank into aggressive hikes to policy rates”.

The Turkish lira (TRY) has steadily weakened since the middle of July after Turkey’s central bank abandoned the de facto peg to the dollar. By around 17:00 Istanbul time on September 23, the TRY was trading at 7.7009, a fresh all-time low. The currency is now down by towards 23% since the start of this year, and it has lost around half of its value versus the USD since the end of 2017.

Tuvey said the policy response to the sinking lira “this time has been very different to that in 2018. Back then, pressure on the lira eased after the central bank signalled, and delivered, aggressive interest rate hikes. The CBRT [Central Bank of the Republic of Turkey] also overhauled its policy framework and declared that it would stick to a single policy rate. While we were always sceptical of this, it seemed to do enough to convince investors that the CBRT was more serious about rebuilding its credibility and tackling the country’s inflation problem.

“This time, though, the central bank’s response has reinforced concerns about the policymaking environment in Turkey. Admittedly, the CBRT has tightened monetary conditions in recent weeks, with the average cost of funding rising by more than 325bp, to 10.61%, since mid-July. And it seems increasingly likely that the CBRT will shift all funding for commercial banks to the late liquidity window, which marks the top of the rate corridor with an interest rate of 11.25%.

“But there are no clear signs that the CBRT is willing to tackle the inflation problem head-on. The central bank seems loath to hike official policy rates due to pressure from President [Recep Tayyip Erdogan]. Even if nominal interest rates hit the top of the corridor, real interest rates will remain negative—headline inflation stood at 11.8% y/y in August. In 2018, real rates were pushed into positive territory. Policymakers’ shift in focus towards maintaining a ‘competitive’ lira suggests that they are now more willing to let the lira weaken.

Ugras Ulku, head of emerging markets research at the Institute of International Finance (IIF), and Benjamin Hilgenstock, an IIF economist, also put out a September 22 commentary on the embattled lira, entitled “Turkey: External Financing Challenges Persist”. They pointed out that Turkey’s near-term external financing challenges appeared to have intensified in the context of a widening current account deficit and sizable FX reserve losses. 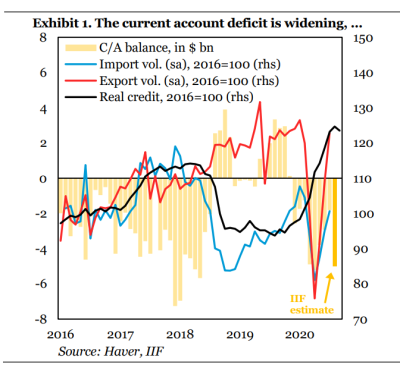 Ulku and Hilgenstock said: “Export volumes fell much more sharply than import volumes during January-April. In addition, tourism revenues collapsed due to COVID-19 containment measures. As a result, the current account deficit reached $22bn during January-July compared to a $2bn surplus over the first seven months of 2019. Monthly trade data shows that the goods trade deficit year-to-date increased from $20bn in July to $26bn in August. This indicates a further widening of the c/a deficit—to around $27bn (or roughly 4% of GDP) over the first eight months of the year.

“With credit growth slowing and the Lira having weakened markedly since mid-July, import growth should moderate during the remainder of the year. At the same time, the recovery in exports has been quite impressive since the height of COVID-19-related disruptions in April. It remains to be seen if the recovery in Turkey’s most important export markets—led by the Euro area—will continue in coming months. A strong bounce back in these countries should help boost Turkey’s exports and lead the current account to shift to a small surplus during September-December. A further normalization of tourism revenues would also support services exports.”

The IIF analysts projected that the full-year current account deficit would come in at around $25bn, or 3.8% of GDP, with risks to the upside as a second wave of COVID-19 infections may lead to renewed disruptions. The shift from a surplus of 1.1% of GDP in 2019 would likely reflect one of the largest deteriorations among major emerging markets, they added.

Ulku and Hilgenstock noted how the current account’s shift into deficit has been accompanied by sizable outflows of non-resident capital, mainly in the form of portfolio investment.

“Such outflows extended into August and early September and led to historically low non-resident holdings of lira-denominated assets—with only $20.9bn in stocks and $5.8bn in bonds remaining. Since non-residents’ positioning in Lira assets declined much faster than FX reserves fell (-$31 bn during January-July), the reserve coverage ratio relative to foreigners’ portfolio assets reached 3.3 in early September—nearly triple the 1.3 in late 2017,” they said.

“In addition to nonresidents’ net selling of Lira-denominated assets, residents’ strong FX demand has also intensified depreciation pressures on the Lira. As part of its policy response to the COVID-19 shock, the CBRT eased Lira liquidity conditions aggressively during March-early July. This led the CBRT’s average cost of funding to remain below median annual inflation expectations during April-July, which appears to have encouraged residents to add roughly $6 bn to their FX deposits since April,” the analysts added.

If non-resident capital inflows do not materialize in a meaningful way, inflows of resident capital to finance some of Turkey’s external financing needs—similar to the developments during January-July—would likely be seen, said Ulku and Hilgenstock.

They added: “Such net resident capital inflows would likely be in the form of private sector withdrawals from deposits abroad in order to make repayments for maturing external debt in the case of external debt rollover rates staying below 100%. As of end-July, Turkish banks and other sectors have $47bn and $19bn, respectively, in their bank accounts abroad from which they can withdraw.

“A further decline in Turkey’s FX reserves would exacerbate its already-high external vulnerability relative to other major EMs. However, a shift to a more orthodox policy set-up could swiftly reverse the ongoing risk-off sentiment for Turkish assets into a search-for-yield sentiment, triggering sizable net inflows of non-resident portfolio capital. Finally, a rise in external debt rollover ratios in line with the economic recovery cycle into 2021 would allow Turkey to accumulate some FX reserves next year.”