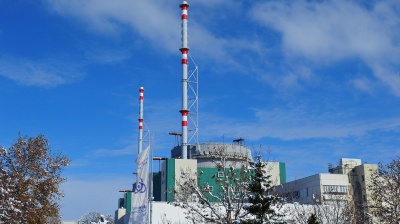 PM Boyko Borissov indicated plans for the new Belene nuclear power plant will be dropped and the equipment used to expand the existing Kozloduy NPP (pictured). / kznpp.org
By Denitsa Koseva in Sofia January 26, 2021

Bulgarian Prime Minister Boyko Borissov has proposed that the equipment purchased from Russia for the planned Belene nuclear power plant (NPP) be used instead to expand the existing Kozloduy NPP. Indicating a further commitment to Kozloduy, Borissov added that two new units could be built at the power station, rather than the single unit previously discussed.

While Borissov didn’t say so explicitly, this appears to mean Belene — the subject of repeated government u-turns in recent years — could again be scrapped.

Belene, downstream from Kozloduy on the Danube that marks Bulgaria’s border with Romania, was planned initially as a substitute for four of the Kozloduy plant’s reactors that were decommissioned as a condition for the country to join the EU. But the project’s viability has been repeatedly questioned, leading officials to first abandon then resurrect it.

Borissov, at the helm of an earlier government, was the prime minister who initially decided in 2012 that controversial project should be abandoned as there was no proof it was financially viable. Moreover, there were concerns regarding the safety of the selected location as Belene is in a zone with a risk of earthquakes.

Four years afterwards, however, Bulgaria was ordered to reimburse over €600mn to Atomstroyexport, a unit of Russia’s Rosatom, which had won the contract to build the power plant and had already started work. Faced with paying off a bill that amounted to around 1% of GDP at that time, Sofia was forced to reconsider.

There is no official data on how much Bulgaria has spent so far about the Belene project, but experts estimate the sum is at least €3bn since the initial launch of the project.

In his third mandate as prime minister, Borissov therefore decided to revive the project, completely ignoring the arguments of his first government, fiercely defended back in 2012. In the summer of 2018, despite strong opposition, the project was revived, and the following May Bulgaria called a tender to pick a strategic investor for Belene. This tender has not been completed yet, although it has attracted interest from Russia, China, France and the US. The government said the delay was due to the coronavirus (COVID-19) pandemic.

Then attention turned back to Kozloduy; in October 2020, the government indicated that it might launch a tender for a new unit at the existing power plant, and two months later Kozloduy NPP started looking into the options to build the new unit. Borissov then said that the equipment purchased for Belene could be used for that project instead.

Kozloduy NPP has two working reactors with capacity of 1,000 MW. In 2019, Bulgaria’s Nuclear Regulatory Agency granted a licence for 10 more years of operations for one of the units after it was upgraded. Two years earlier, the other unit was also upgraded. This has added 30 years to their certified operational life.

Borissov's latest decision raised questions abound about the reasons for the u-turn. The sharp switch of the government’s intentions was revealed just a few months before the April 4 general election.

As there have been no details about the government’s unexpected plan to expand the existing nuclear plant, Ramadan Atalay, an MP from the opposition ethnic-Turk Movement for Rights and Freedoms (DPS), said that these statements were pre-election pledges rather than real plans. He claimed, as quoted by Investor.bg, that Bulgaria has no source of funding for the Kozloduy expansion at the moment, which would mean that it would be funded by the state-owned Kozloduy NPP. However, it is not clear at the moment where the electricity it produces would be sold as it would be expensive, considering that the estimated cost of construction is around €10bn for the two units.

Moreover, the government started talking about the expansion of Kozloduy a few days after the US Assistant Secretary for Energy Resources Francis Fannon said that his country is maintaining its position against the construction of the Bulgarian section of the Turkish Stream (TurkStream) pipeline and of the Belene NPP, as it considers they will not help Bulgaria achieve energy diversification and security.

As a growing number of countries turn to nuclear energy as a way to achieve energy security and reduce carbon emissions, there is growing rivalry between China, Russia and the US. Russia has established itself as a major supplier of nuclear power plant equipment internationally — and Russian companies would have been in a strong position to complete Belene as the existing equipment was supplied by Atomstroyexport. In neighbouring Romania, China General Nuclear Power Corp. (CGN) was originally picked to expand the Cernavoda nuclear power plant, but Bucharest broke off its agreement with the Chinese company in June 2020 and now plans to work with US, French and Canadian partners instead.

But there are more fundamental problems with the viability of the Belene project, which has been kept going to a large extent because of the huge sunk costs.

Sofia may struggle to get EU approval for the project, as the European Commission said when it was revived in 2018 that it will be considered a new project and will only gain approval if the procedure restarts from scratch.

Experts have repeatedly said that Bulgaria does not need any new nuclear reactors and that the electricity they would produce would be too expensive.

Initially, Bulgaria claimed that Belene would replace the two existing units at Kozloduy once their lifespan ends, but as the two reactors have now been upgraded this is not the case anymore. Then, there were claims that Bulgaria could export the electricity within the region but experts again claim the electricity would not find a market as it would be too expensive. Neighbouring countries are also building their own capacities, and might not need to import electricity at all.

Foreign investment has transformed Eastern Europe, says wiiw report
18 hours ago
Will Croatia’s latest shot at World Cup glory ease economic slowdown?
1 day ago
Belarus’ government to expand political-economic control at the expense of economic growth
2 days ago
Sino-Russian ties continue to deepen as Western sanctions drive their economies together
2 days ago
War and wine: how rattled economies in Ukraine and Russia are pushing Georgian winemakers to pivot to new markets
3 days ago