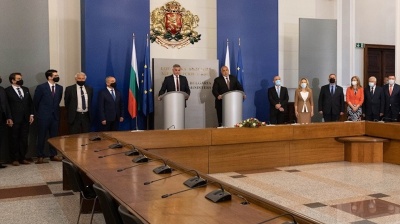 Boyko Borissov hands over to the interim government led by Stefan Yanev. / government.bg
By Denitsa Koseva in Sofia May 12, 2021

Bulgaria’s caretaker government will focus on rule of law and will attempt to start restoring people’s trust in public institutions, the newly appointed Prime Minister Stefan Yanev said before taking the post on May 12.

The caretaker government is taking over power amid a turbulent political and economic situation in Bulgaria and its main task will be to organise the July 11 snap election.

"I cannot pledge that we shall solve the problems accumulated over the years in the short term of the government but I shall do my best to at least start this process,” Yanev said during the inauguration ceremony live broadcasted by Dnevnik news outlet.

Yanev and the new Interior Minister Boyko Rashkov said that securing fair and transparent voting will be a priority in their work.

Meanwhile, President Rumen Radev also set as a task establishing the situation in the country after three-time prime minister Boyko Borissov lost power. Although Radev did not said this was a review of Borissov’s work, it was seen as such by many people.

Meanwhile, the caretaker Foreign Minister Svetlan Stoev said that the government has no authority to change the veto imposed by the previous government on the launch of membership talks between the EU and North Macedonia.

"Bulgaria's framework position was accepted by consensus among all political parties in the Bulgarian parliament. As an interim government, we have no authorisation to change that," he said.