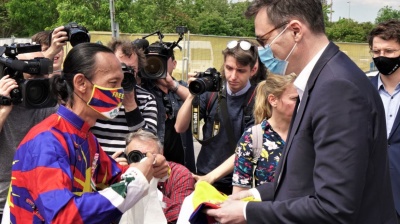 A Tibetan activist thanks Budapest mayor Gergely Karacsony for renaming a road after the Dalai Lama.
By bne IntelliNews June 3, 2021

In protest against the campus of Chinese Fudan University being built in southern Budapest, the independent mayor of the district backed by opposition parties has renamed the public streets in the area in a way that will likely upset officials in Beijing.

The new public street names around the potential site of the university would carry the names of people like the Dalai Lama or Xie Shiguang, a Catholic bishop imprisoned by Chinese authorities. Two other new street signs include the Free Hong Kong Road and the Road of Uighur martyrs

Since investigative news site Atlatszto (Transparency) released government documents about plans that Shanghai-based Fudan is planning to build its first campus outside of Europe in Budapest in early April, the issue has stirred up political discussion about Hungary’s engagement with China.

The cost of the project would be around €1.5bn, financed mostly from Chinese loans, the rest covered by Hungarian taxpayers, or the "usual Belt and Road conditions", writes Szabolcs Panyi, who broke the story in early April.

The €1.5bn earmarked for the project is more than the Orban government spent on its entire higher education system in 2019.

The construction of Fudan’s Budapest campus will be subject to a Chinese-Hungarian bilateral agreement, excluded from EU procurement rules. China State Construction Engineering Corporation (CSCEC) will be in charge of building the 500,000 sqm facility by 2024.

The ceremonial renaming of the streets was the sole decision of Ninth District mayor Krisztina Baranyi, but was supported by opposition parties in the local council, she told the press.

Although the government agreed in late 2019 with China on Fudan, she only heard rumours about the mega-construction project earlier this year, just a few weeks before the story broke.

Baranyi was given the Tibetan flag at the ceremony by a handful of Tibetans, who expressed their gratitude for the move.

The Orban government has agreed with China in late 2019 on the establishment of the first foreign campus of Fudan and the first Chinese university to open a campus in the EU in Budapest. The government argues that bringing the world’s 34th ranked university to Hungary would serve the country’s interest, and financially it would pay off in the long run.

"This Fudan project would put in doubt many of the values that Hungary committed itself to 30 years ago" at the fall of Communism, said Budapest’s liberal mayor Karacsony, adding that renaming of the streets sends a clear signal to China that economic interests would not take precedence over human rights.

Karacsony said that if elected prime minister in 2022, he would vie for "pragmatic cooperation" with China. The 45-year-old is one of the six candidates for prime minister in the autumn primaries organised by the opposition.

The six-party rainbow coalition has opposed the controversial project not only because of Fudan’s ideological affiliation with the Chinese Communist Party and the high costs, but because the future campus would take away space from Student City, a large residential property project to provide affordable accommodation and accompanying infrastructure to 8,000 students in the southern rust zone of the capital.

Budapest would oppose the Fudan campus by all means, Karacsony said after recent talks with the Minister of Innovation and Technology Laszlo Palkovics, who was mandated by the government to oversee both projects. The minister was in charge of managing the transfer of ownership of Hungary’s universities to private foundation and talks with George Soros funded Central European University, which was eventually forced to relocate to Vienna.

His critics say there is no question that in case of conflict, he would side with Fudan over the Student City project.

Budapest liberal mayor aired the possibility of holding a referendum on the Chinese university, but that won’t be possible until at least September or October as the government has extended the state of emergency rules, which ban holding local or national referendums. In the meantime, the local district is planning a consultation with residents on the issue.

After winning the local election in October 2019, Karacsony backed down from its election promise of blocking the construction of a new athletic stadium in southern Budapest and the hosting of the 2023 World Athletic Championship after the government agreed to increase funding to Budapest healthcare and stand by the Student City project.

A recent poll shows that around two-thirds of the respondents oppose the Fudan investment and even 31% of Fidesz supporters were more inclined to oppose it.

The US embassy in Budapest has also expressed reservations over the project, citing security issues. Despite the ban on mass gatherings, a protest is scheduled for Saturday in central Budapest.

Kremlin preparing for a protracted conflict by putting Russian economy onto a war footing
3 hours ago
Hungary’s forint slides to new low after central bank ends tightening cycle
6 hours ago
Slovak ministers criticise Czech border controls
6 hours ago
Might Trussonomics be a branch of Erdoganomics?
12 hours ago
Report says Russian gas supplies to Europe via TurkStream now endangered
15 hours ago