Shopkeepers in the Great Bazaar of Tehran closing their shops in protest at the ongoing economic crisis.
By bne IntelliNews June 25, 2018

Several hundred people, mainly men, shut down their stalls in Tehran’s Grand Bazaar on June 25 and marched on the country’s parliament, a 30-minute walk from the main trading centre.

Those involved in the spontaneous demonstration clashed with police after they set at least once police kiosk on fire. Officers responded by firing tear gas into the unruly crowd.

The small businessmen work in the heart of Tehran’s trading district and are angry with the Rouhani Administration’s handling of the US walkout from the nuclear deal and upcoming sanctions from Washington - the Iranian rial (IRR) had plunged to a new all-time unofficial market low of IRR90,000 to the dollar on June 24, according to reports via social media.

“Shopkeepers in Great Bazaar of Tehran, the heart of Iran's economy, have gone on strike, closing their shops in protest at the ongoing economic crisis,” Reza Khaasteh tweeted from Tehran. 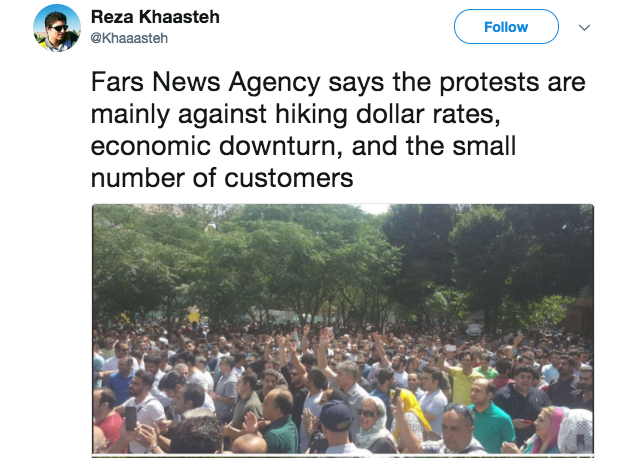 The mob descended on the newly reinforced parliament complex, which has seen security beefed up following last year’s ISIS terrorist attack on the building. Police launched what appears to be tear gas to disperse the crowds and keep them away from the walls of the 2km-square site. Video posted on social media of the event show people coughing and running away from the northern entrance to the complex.

Police are later seen to be approaching the protesters after they set fire to a police bike on the Mostafa Khomeini Street, which runs directly next to the former parliament building.

The protests started earlier on 15 Khordad Street, in the Bazaar District, where traders stopped all trade and closed their shutters in protest at the current economic hardship. Some local hard-line news agencies were first to report the traders’ anger and the administration’s ineptitude in halting the slide of the IRR. Some observers have speculated that the protests have been orchestrated by these hardliners to stir up resentment at the administration led by pragmatic-centrist President Hassan Rouhani.

Following the clashes outside parliament, the Tehran Gold and Jewellers Union announced that they were halting all trade in gold, according to local economics website Tahlilgaran, tracking the developments.

The unplanned demonstrations come a day after Tehran’s two major shopping malls dedicated to mobiles and electronics shut down in protest over alleged rent-seeking by official importers, and refused to sell their products using the government’s reduced rial rate of IRR42,000 to the dollar.

Tehran's large Bazaar has long been a breeding ground for opposition to governments in Iran's history, most recently in 1978, when it shut down in a protest at the rule of the last Shah of Iran Mohammad Reza Pahlavi. The group of mostly conservative business people supported the incoming government and Islamic Republic created by Ayatollah Ruhollah Khomeini.

US warns Belarus to keep its commitment to neutrality
9 hours ago
US Secretary of State Blinken in Kyiv, warns Russia could attack “at very short notice”
11 hours ago
Defence agreement between Slovakia and the US divides politics and society
23 hours ago
Uzbekistan launches production of military drones
1 day ago
New impetus between Bulgaria and North Macedonia at top-level Skopje meeting
1 day ago