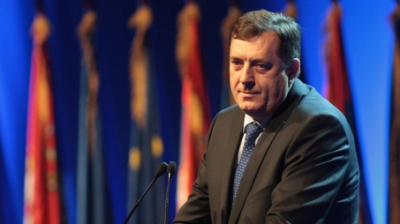 Bosnia & Herzegovina’s smaller entity, Republika Srpska, will hold a referendum on the celebration of Republic Day on September 25 despite the decision of the state-level constitutional court to suspend it and amid strong pressure from the international community, local politicians and even the entity’s closest ally Serbia.

There is speculation that Republika Srpska is preparing to use the referendum as an excuse to secede from Bosnia, especially after the entity’s president Milorad Dodik’s recent attempt to secure Moscow’s backing at a meeting with Russian President Vladimir Putin. Dodik has already hinted of this, saying that Republika Srpska will respond to violence with secession. However, such a move could seriously destabilise the region.

Republika Srpska wants to celebrate Republic Day on January 9 - the date marking the anniversary of the proclamation of the Republic of the Serb People of Bosnia and Herzegovina in 1992, shortly before the outbreak of the Bosnian civil war. At the time Bosnian Serbs claimed their republic was part of Yugoslavia – rather than Bosnia, which had declared its independence the year before.

January 9 is also an Orthodox religious holiday, the Day of St Stephen, which is not observed by Catholic Croats or Muslim Bosniaks. Given the overwhelmingly ethnic Serb population in Republika Srpska, its population is expected to vote in favour of the holiday.

Last year, Bosnia’s constitutional court decided that the celebration of Republic Day in the entity contains elements of discrimination and should not be held until it meets the criteria of international legislation for human rights.

In an effort to comply with the constitutional court’s requirements and lower the tensions, Republika Srpska has been considering amending its law on public holidays. On September 21, Republika Srpska’s parliament asked the government to propose amendments to the law on public holidays. Several days earlier, the Dodik had pledged that the law would be changed so that it meets constitutional requirements. The law will allow those who do not wish to celebrate a certain holiday, not to celebrate it.

However, even this last ditch attempt to resolve the constitutional crisis in the country seems to have come too late as the entity has not given up plans to hold the referendum, which will breach the Dayton peace agreement that ended the bloody 1992-1995 Bosnian war.

This led to a constant rise of tensions in the country, which peaked with the threats of wartime Bosnian Muslim commander Sefer Halilovic.

On September 20, Halilovic, former general and commanding officer of the so-called Army of the Republic of Bosnia and Herzegovina controlled by Bosnian Muslims during the Bosnian war, said that if Republika Srpska holds the planned referendum, this will unpack the Dayton peace agreement and could lead to war. He also said that Republika Srpska can only hold out for 10 to 15 days in a potential clash and that many people in Bosnia are ready to start a war.

The statements of the former army commander, who is also the leader of the nationalist Bosnia and Herzegovina Patriotic Party BPS-Sefer Halilovic, provoked very strong reactions from both Republika Srpska and Serbia. Belgrade gave a clear signal that it will not abandon Republika Srpska in case of a military conflict.

Some local analysts believe that politicians across in the country are using the referendum to increase their popularity ahead of local elections in early October and that nothing significant will follow. However, the state-level police are preparing for possible violence on September 25 and the days after the referendum.

At the same time, the international community has been putting heavy pressure on Republika Srpska to scrap plans for the referendum and calm down the situation. The ambassadors of the Peace Implementation Council’s (PIC) have issued two statements, calling on Republika Srpska to to respect the decisions of the constitutional court. In a joint statement in July, EU High Representative Federica Mogherini and European Commissioner Johannes Hahn said the same. High Representative Valentin Inzko also has called on all parties to respect the constitutional court’s decision.

However, Republika Srpska can still rely on its other strong ally – Russia, which did not sign PIC’s declarations and gave Dodik its full support for the referendum. The Republika Srpska’s president even visited Moscow to meet Putin on September 22, just a few days before the referendum. Although both Banja Luka and Moscow denied that the meeting was related to the referendum, it was seen as a demonstration of support by analysts.

According to Dodik, the referendum was not discussed during the meeting. In a phone conversation with a journalist from daily Nezavisne Novine, Dodik said that he and Putin had discussed stability and peace in the region, and the preservation of the Dayton agreement as a factor for stability in the region.