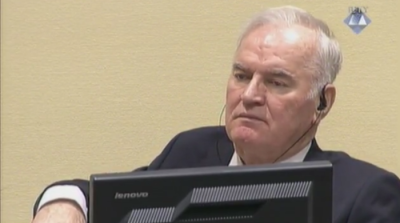 By Eldar Dizdarevic in Sarajevo June 7, 2021

A United Nations court at The Hague is scheduled to deliver its final verdict on June 8 on an appeal by former Bosnian Serb military chief Ratko Mladic against his genocide conviction.

The ruling will close the case against the man dubbed the Butcher of Bosnia who has challenged his 2017 conviction and life sentence for genocide, crimes against humanity, and war crimes committed during Bosnia & Herzegovina’s 1992-95 war.

The final verdict is important in Bosnia because it closes the tribunal's last key case and because it concerns genocide, the deliberate killing of people from a particular nation or ethnic group with the aim of its destruction.

In November 2017, Mladic was found guilty and sentenced to life in prison for genocide and several other crimes committed during the war when he was commander of the Bosnian Serb army.

Mladic was indicted on two counts of genocide – across Bosnia & Herzegovina and specifically in Srebrenica, five counts of crimes against humanity and four counts of violations of the laws or customs of war in the most significant war crimes trial in Europe since the Nuremberg tribunal.

The Srebrenica killings were conducted under the command of Mladic, former Bosnian Serb leader Radovan Karadzic’s military chief. Some 8,000 Bosnian Muslim men and boys were killed and 25,000 women and children were deported from the UN-designated ‘safe area’ of Srebrenica.

However, was found not guilty of genocide across Bosnia & Herzegovina, a conclusion that angered Bosnian Muslims.

As the final verdict in the case approaches, views in Bosnia are divided over Mladic's sentence. For Bosniaks he is a villain and war criminal.

“He should spend the rest of his life in prison. I don’t wish to do him any harm myself. All I wish is that God may let him see the grave of his son as I am watching the graves of my two sons,” Military.com quoted Dulija Jusic, who lost two sons and 33 relatives in the Srebrenica massacre.

Bosnian Serbs, however, still worship their wartime commander as a martyr and hero, despite earlier court rulings, including a genocide verdict.

The verdict comes just days after the appointment of former German minister Christian Schmidt as Bosnia’s new high representative highlighted the divisions within the country and reopened the debate about the future of the institution.

The Office of the High Representative (OHR) was set up in 1995 after the signing of the Dayton Agreement which brought the Bosnian war to an end.

The high representative is responsible for overseeing the implementation of civilian aspects of the General Framework Agreement for Peace (GFAP), also known as the Dayton Agreement, woking with the people and institutions of Bosnia to ensue the country “evolves into a peaceful and viable democracy on course for integration in Euro-Atlantic institutions”, according to the OHR website. It was set up on a temporary basis, to remain in place until Bosnia “is able to take full responsibility for its own affairs”.

Nearly 26 years on, the OHR is still in place, despite the repeated questioning of the post-Dayton status quo by Milorad Dodik, the Serb member of Bosnia’s tripartite presidency, and other Bosnian Serb politicians.

The Peace Implementation Council Steering Board (PIC SB) political directors welcomed Schmidt’s appointment as Bosnia’s new high representative and expressed their support to him in strengthening the country’s stability by ensuring consistent implementation of the civilian aspects of the Dayton Agreement.

The PIC SB statement said it was confident Schmidt will accelerate the completion of the 5+2 agenda and contribute to stability in Bosnia. A communiqué posted on the OHR website on June 1 said the PIC reminded all parties of their obligation to comply fully with the Dayton Agreement, all its annexes, and decisions of the high representative.

It reaffirmed its unequivocal commitment to the territorial integrity and fundamental structure of Bosnia as a single, sovereign state comprising two entities. Commenting on one issue that has been repeatedly raised by Dodik, the initiator of a secession referendum in Republika Srpska, the PIC SB restated that the entities have no right to secede from Bosnia and only exist legally by virtue of the Bosnian constitution.

Dodik said on May 30 that Republika Srpska “does not accept” the appointment of Schmidt to the post of high representative. Dodik added that the PIC was “bluffing” when it “supposedly appointed” the official, arguing that the process was not according to the procedure, reported Srna news agency.

“The person they supposedly appointed as their high representative will not be acceptable and Republika Srpska will not accept him or any of his competencies,” Dodik said, urging the public to reject Schmidt’s appointment as well.

Schmidt was an unexpected choice for the post, being a former food and agriculture minister and member of the Bundestag, with little experience in the Western Balkans. Despite this, the mood of the people in Sarajevo and the rest of Bosnia’s Muslim-Croat Federation is mostly positive. First, they see the new high representative as ready to do something concrete at last, rather than being a mere administrator like his predecessors. Secondly, people in the Bosnian Federation believe Dodik is afraid of the new high representative and the so-called Bonn powers.

Among the steps take by the current high representative, Valentin Inzko — who has held the post since 2009 — recently, were Inzko’s demand that Republika Srpska withdrew honours for convicted war criminals and for the removal of a plaque honouring convicted war criminal Radovan Karadzic, achieved after he threatened Dodik with EU sanctions.

When the PIC SC agreed on Schmidt’s appointment, it was noted that Russia did not agree with the June 1 communique. Moscow believes that the OHR is no longer needed in Bosnia, a position shared by political representatives of Republika Srpska.

There have also been warning words from Serbia. On June 2, Republika Srpska political representatives held a meeting with Serbian President Aleksandar Vucic in Belgrade. After the meeting, Vucic said that Belgrade would, for the first time, demand regular reports from the high representative in line with the Dayton Agreement.

Vucic added that "these are not easy days for the Serb people”, saying it is “dangerous” to play with the Bonn Powers of the high representative, to impose a legal and constitutional solution without the consent of all three nations.

Bosnian Presidency member Sefik Dzaferovic said in response to Vucic’s statement that that Serbia has no rights when it comes to the arrival of the high representative in Bosnia.

Serbia is a signatory to the Dayton Peace Agreement and its only obligation under the agreement is to respect the sovereignty and territorial integrity of Bosnia, not to take any action that would violate those values, Dzaferovic added.