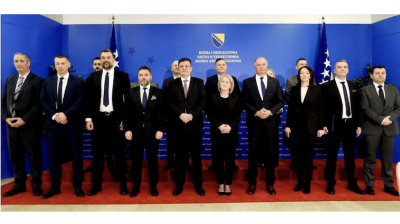 Borjana Kristo's new government will seek to return Bosnia to the path towards EU membership. / vijeceministara.gov.ba
By Denitsa Koseva in Sofia January 25, 2023

Bosnia & Herzegovina appointed a new state-level government on January 25. Headed by ethnic Croat Borjana Kristo, the government will seek to return the country to the path towards EU membership.

The appointment of the government came unusually quickly – around four months after the October 2 general election. Usually, it takes more than a year for political parties to reach a compromise and compile a cabinet.

The new government was backed by 23 out of 42 MPs in the House of the Representatives, which is the country's state parliament.

Bosnia consists of two autonomous entities – the Muslim-Croat Federation and Republika Srpska, and three constituent peoples – the Bosniaks (Bosnian Muslims), the Croats and the Serbs. Each entity has its own parliament, government and president and there are also state-level institutions.

When Kristo was nominated in December, she said she would lead the government towards restarting the process of integration in the EU. Since then, in mid-December, Bosnia was granted EU candidate status after years of waiting.

“Our path and commitment is the European path,” Kristo said after lawmakers voted on her government.

“We have to justify the EU candidate status we were granted in order to make a step forward on the path that is important for Bosnia. The legislative and executive powers must be in synergy and we want to achieve that,” said Kristo.

The government led by Kristo, 61, was backed by eight parties, including the main Croat party, HDZ BiH, of which she is deputy-leader, the main Serb party, the SNSD led by the secessionist pro-Russian President of Republika Srpska Milorad Dodik, and several Bosniak parties.

Tegeltija and Helez are Kristo’s deputies.

The new prime minister has 27 years of experience as politician and has served as president of the Federation and as deputy in both the regional and national parliaments.