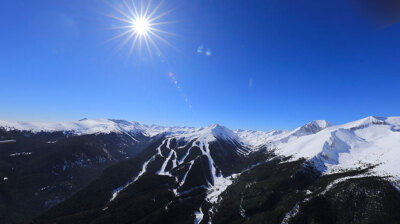 Unusually warm weather and the lack of snow have forced many ski resorts in Southeast Europe to delay the start of the winter season.

The first days of 2023 have been unexpectedly warm, with eight countries in Europe recording all-time high temperature records for January on New Year’s Day. Temperatures in Southeast Europe are rising faster than the global average, and ski resorts across the region are expected to be increasingly snow-free in the coming years.

In Bulgaria, where the ski season usually begins no later than around Christmas, only ski runs whose managers own artificial snow machines are working, but even the artificial snow is insufficient.

In one of the most popular resorts, Bansko, only one out of 15 ski runs is currently operational, according to Mediapool news outlet. Photos show that even at 2,550 metres above sea level there is no snow.

Another big ski resort – Pamporovo – is doing a bit better compared to Bansko with seven runs operating with artificial snow. However, that snow is melting by lunch time due to the warm weather.

In Borovets, only three short runs are working, while the complete lack of snow on the Vitosha mountain has led to a delay to the start of the season.

One visitor to a Bulgarian ski resort commented on Twitter that he was “roasting” on the slopes and called the situation “Global warming in action”.

The social media accounts of Crystal Ski, a UK-based skiing holiday company, have been inundated by complaints from customers including those at resorts in Bulgaria. The company has sought to reassure frustrated skiiers that resort operators are doing all they can, and that more snow is expected from January 7.

The warm weather has also hit the winter tourist season in Bosnia & Herzegovina, although the main ski resort in Vlasica was officially opened in mid-December. There are some tourists despite the lack of snow, according to local media.

In Croatia, the lack of snow is also affecting the winter ski season. On January 5, the second slalom race for women Alpine skiers was cancelled due to the warm weather. The slalom, which was supposed to be held on Mt Sljeme in the capital Zagreb, is part of the 2023 Audi FIS Alpine Ski World Cup. Some of the events have been moved to neighbouring Slovenia.

At Serbia’s biggest ski resort Kopaonik, temperatures are hovering just above zero and there is little natural snow. “How weird [it is] when I don’t see snow  on Kopaonik,” commented one visitor on Twitter.

In Montenegro, which relies strongly on tourism, the National Tourist Organisation said that the winter season has started well with a lot of reservations for Christmas and New Year’s Eve holidays. Those reservations were at the level of the record-high 2019. However, the lack of snow could leave Montenegrin ski tracks closed and lead to cancellation of reservations.

COMMENT: The new Cold War will be different, and not only because of China
INTERVIEW: Helen Rodwell, head of CMS’ corporate practice in CEE
RBI's 2022 profits soar to €3.6bn, with Russian operations representing more than half

The energy crisis in Central and Eastern Europe has lost some of its bite after a mild winter and record LNG imports led to a slump in natural gas prices. The EU has made good progress in replacing Russian energy supplies.