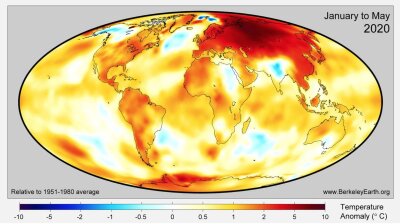 Russia set new all-time high temperature records in the Arctic last summer and recorded a spread of 85.6C between the hottest and coldest parts of the country on a single day – the second-largest spread in a single country on record. / wiki
By bne IntelliNews December 16, 2021

The UN agency confirmed after more than a year of calculations that a temperature of 38 degrees Celsius in the Verkhoyansk settlement on June 20, 2020, which is 115 km inside the Arctic Circle, was the highest ever recorded in the region.

“This new Arctic record is one of a series of observations reported to the WMO Archive of Weather and Climate Extremes that sound the alarm bells about our changing climate,” WMO Secretary-General Petteri Taalas said in a statement. “In 2020, there was also a new temperature record (18.3 C) for the Antarctic continent,” he added as cited by the Moscow Times.

Temperatures in Russia’s northern regions are rising three times faster than in the rest of the world as Russia’s weather goes crazy. Russia’s permafrost is melting, which could cause up to $1 trillion worth of damage to the urban and energy infrastructure in the frozen hinterland. The Kremlin has belatedly woken up to the dangers of global warming and this year has begun to roll out a comprehensive climate change action plan. The Kremlin has pledged that Russia will be carbon neutral by 2060 and a $6.5bn decarbonising plan will go into effect early next year.

Russia set another temperature record on December 8, 2020, when contrasts across the country reached 85.6 C after the temperature in Shatoy in the southern republic of Chechnya rose to 24.5 C and dropped to -61.1 C some 6,000 km away in Oymyakon in the republic of Sakha – the second-widest temperature spread in one country on record.

The rising temperatures are already causing problems after Russia suffered a string of environmental disasters in the last year.

A power unit belonging to Norilsk Nickel spilled over 20,000 tonnes of oil into Arctic rivers in the Pyasino region in June 2020; that was declared a federal emergency by the Kremlin and cost Norilsk $2bn in fines. Also in June 2020, a once-in-a-1,000 year sudden snow melt flooded the TGK1 power station near Murmansk, putting two of its hydropower units out of action.  A few months later an unusual algae bloom off the coast of Kamchatka killed all sea life along several kilometres of coastline in October 2020. And most recently, Russian oil major Lukoil spilled 100 tonnes of oil in the Komi Peninsula, although very little of that got into the local rivers that lead into the Barents Sea.

bneGREEN: Energy efficiency investment turns the corner in 2022, but more is needed
4 days ago
bneGREEN: EU energy ministers agree to speed up permitting and deployment of renewables temporarily
7 days ago
bneGREEN: ING: Euro sustainable bond supply set to stagnate in 2023
12 days ago
Bulgarian PV equipment company AmonRa Energy to hold IPO
14 days ago
bneGREEN: Climate paralysis at COP27 as no progress made on 1.5 degrees
15 days ago