The mystery of Kamchatka’s environmental disaster 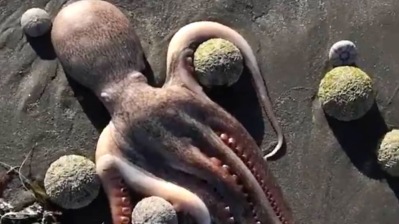 Some sort of massive environmental disaster off the coast of Kamchatka hkilled 95% of marine life in the sea there, but no one knows just what happened. / wiki
By Ben Aris in Berlin October 8, 2020

Something awful happened off the coast of Kamchatka in Russia’s far east that wiped out 95% of all the marine life there, but no one is sure what it was.

Reports began to surface three weeks ago of problems with the water on what is usually pristine conditions, as it is in one of the most remote and sparsely populated regions of Russia. Surfers taking advantage of the last days of summer on the popular Avacha Bay reported feeling nauseous and suffering from burning eyes after being in the water.

Initially the local government denied anything was wrong but when the shoreline suddenly filled up with kilometres of dead fish, urchins and octopus there could be no more denials. The images were widely spread on social media and the local government reacted by opening an investigation.

However, as the scale of the disaster became apparent the federal authorities have now got involved. Russia’s Investigative Committee opened a criminal investigation this week into the pollution that’s nearly wiped out all marine life off Kamchatka’s coastline.

Officials are investigating the incident as pollution and a violation of Russia’s rules for handling environmentally hazardous materials. If found and convicted, the perpetrators face penalties ranging from small fines to as many as five years in prison.

However, the investigation has not got very far. The samples are oily and contain high levels of phenol, which suggests that the pollution is related to hydrocarbon production, but the nearby oil and gas companies say they have had no spills of problems with tankers recently. Likewise, onshore facilities are also problem free.

Initial samples collected in Kamchatka’s coastal waters contained “a pollutant similar in consistency to industrial oil or some other substance containing oily components,” according to the initial finding by the Investigation Committee realised on October 7.

Officials say they are investigating all possible sources of the pollution, including landfills bordering Avacha Bay and coastal areas where pesticide supplies are buried.

Greenpeace has called the incident a major environmental disaster. The mass death of marine life in Avacha Bay follows on from a major oil spill in Russia’s Far North at a power station belonging to Norilsk Nickel that was the worst environmental disaster in decades and which was declared an environmental emergency by Russian President Vladimir Putin. Norilsk has been hit with a $2bn clean-up bill, which has wiped out its entire profits for this year.

Environmental problems are a politically sensitive topic in Russia and have spurred a series of large-scale protests across the country in recent years of protests against things like smelly landfills close to urban areas. Environment issue are able to bring much larger crowds of protesters onto the street than purely political issues like vote-rigging or corruption.