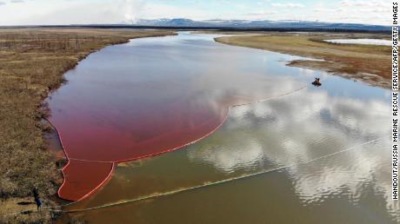 A massive oil spill in the northern city of Norilsk is being dubbed Russia's Exxon Valdez
By bne IntelliNews June 4, 2020

The Kremlin has declared a spill of diesel fuel at the power plant of Norilsk Nickel metals major in the Krasnoyarsk region as a federal emergency, and heads may start rolling as deep structural ESG dangers are exposed. The scale of the spill is unprecedented, leading some to dub it Russia's Exxon Valdez that will take decades to clean up.

The spill occurred on May 29 at the CPH-3 of Norilsk (combined power and heat plant) and the decompressed fuel tank has released over 20,000 tonnes of oil products into two adjacent rivers and the soil.

As reported by Kommersant daily and The Bell, the spill is likely to seep through into one of the largest lakes in the Pyasino region, linked to the Kara Sea, making it one of the worst ecological catastrophes in the history of the Arctic region, comparable to the 37,000-tonne spill of the Exxon Valdez tanker.

President Vladimir Putin has slammed the governor of the Krasnoyarsk region, Alexander Ussa, and the head of CPH-3, Sergey Lipin, while saying it was "mindboggling" that the authorities had found out about the spill as late as May 31 from social media. Norilsk Nickel claims it informed Moscow of the incident as soon as 25 minutes after it occurred.

Russia's Ministry of Emergency Situations (MCS) needs to present an action plan for clearing the spill by June 5, and is reportedly proposing to burn the fuel stains. At the same time, Environment Minister Dimitri Kobylkin said he finds a "bonfire of such magnitude" unimaginable and seriously doubts the possibility of fully mitigating the ecological damage, let alone within under two weeks as proposed by the ministry.

Clouds thicken over Potanin's NorNickel
The outlook on metals major Norilsk Nickel (NorNickel) could be clouded by the spill, first of all by having directly to pay the bill for cleaning up. The Bell reminds that the Exxon Valdez spill costed $2.5bn in damages and fines, while the watchdog Rosprirodnadzor's early estimates are RUB100bn ($1.5bn), potentially rising to "hundreds of billions".

But Kremlin could also choose to make a scapegoat of the parent company of the power plant and punish it by cutting it off from resources and finance in other fields. As reported by bne IntelliNews, NorNickel has been rapidly expanding in the lucrative PGM (palladium group metals) segment, was allowed to set up Arctic Palladium 50:50 joint venture with Russian Platinum, and asked for $1bn in state support for it.

At least so far, the name of the NorNickel's stoligarch Vladimir Potanin ($26bn fortune acccording to Forbes) has not been mentioned as Putin chastised local officals, The Bell notes. But Rosprirodnadzor said it would be dispatching an executive team to Norilsk to estimate the degree of complacency of the company.

BCS Global Markets commented on June 4 that reaction to the news of a fuel spill is "overblown", seeing the event as "an unfortunate accident rather than a systematic negligence of ecological focus."

The BCS GM analysts still see NorNickel shares as a Buy, despite the short-term turbulence, and remind that the name has a 11-12% dividend yield history. Although the fuel spill is the second largest in Russia's history, BCS GM expects the damages to be less than $200mn, or less than 0.5% of NorNickel's market capitalisation.

"Still, buying now would be catching a falling knife – at least for the next week, after which the heat is likely to calm," BCS GM admits.

Major stain on Russian ESG
A broader long-lasting consequence of the spill is the compromised image of Russian industrial and hydrocarbon majors when it comes to ESG. As reported by bne IntelliNews, Russian companies have been putting ESG policies into place in recent years, with the focus on the environmental element only expected to become more and more relevant for investors.

The spill risks dominating the headlines not for months, but for years to come, with long-lasting damage to the environment, as the fuel will remain in the soil and poison the underground water flows in the region. The Ecology Institute of Higher School of Economics estimated that in central Russia the spill will be felt for 3 to 4 years, but in the slowly recovering ecosystems of the Arctic potentially for decades.

However, Kommersant also suggests that the spill could lead to a major and swift revamp of environmental regulation for companies working in the Arctic region.

"Norilsk was among the most progressive companies on the ESG side with among the largest ESG related projects worth $2bn-2.5bn in investments and $100mn in annual operating expenses," BCS GM reminds.

"However, investors are likely to focus on the accident for quite some time, as we can see with Severstal – a blast at a mine in 2016 continues to weigh down the company’s ESG rating," the analysts argue.

Tip of the iceberg?
Most notably, the spill in the Krasnoyarsk region could be just a tip of the iceberg and a warning call for deeper dangers for Russian energy infrastructure in the region amid global warming. The vice-president of NorNickel, Sergei Dyachenko, told the press that the damage to the tank could have occurred due to permafrost soil thawing.

"We can now assume according to documents we are retrieving that permafrost thawing could occur due to abnormally mild summer temperatures lasting for several years and that the partial subsidence of base supports could take place," Dyachenko said, as cited by Tass.

So far Russia has welcomed global warming, as it has provided easier access to Arctic resources and the development of the iced Northern Sea Route into a major global maritime pathway. But the spill at CPH-3 could mean that existing downstream and transportation infrastructure in the region faces potentially catastrophic erosion, needing trillions of rubles of investment in repairs.