Bloody Battle of Soledar is hotbed of information warfare 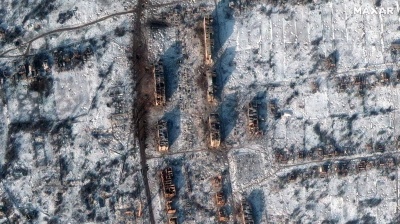 Despite Russian claims to have taken what is left of Soledar, Ukraine reports fierce fighting is ongoing there / bne IntelliNews
By Dominic Culverwell in London January 17, 2023

The bloody fighting in Soledar has caused a heated information war not only between Ukraine and Russia but also within the Russian forces themselves. Both the mercenary organisation the Wagner Group and the Russian Defence Ministry are attempting to control the narrative and take credit for allegedly capturing the war-torn town in Donetsk Oblast.

It is still not entirely clear if Soledar has completely fallen, with contractionary reports coming from the front line. Ukrainian drone unit commander Robert “Magyar” Brovdy wrote on Telegram that Russian troops occupied the last industrial zone on January 15 and that the front lines have now moved to outside the city limits, the Kyiv Independent reported.

Nevertheless, the UK Ministry of Defence reported on January 16 that Ukraine “almost certainly maintained positions” in Soledar as of January 15. At the same time, a video allegedly showing the destruction of three Russian warehouses and mobile points in Soledar was shared by Brovdy, suggesting that Ukrainians are at least still attempting to gain control over the town.

The Wagner Group claimed to have captured the town on January 10, although this was denied by Ukraine, who said the fight was ongoing but “difficult”. The Russian Ministry of Defence then announced that Russian forces had seized Soledar on January 12, praising assault and army aviation, missile and artillery troops and Russian airborne forces; however, it did not mention the involvement of the Wagner Group, according to the Institute for the Study of War (ISW).

Following a backlash, the Russian MoD then acknowledged Wagner’s involvement as “participants in the Battle for Soledar”. Days later, Wagner Group financier Yevgeny Prigozhin gave medals to Wagner fighters, which ISW sees as an “ongoing effort to frame the capture of Soledar as a Wagner accomplishment rather than a joint effort with the Russian Armed Forces”.

According to the ISW, the two competing narratives reveal the insider fighting going on between Wagner and the Russian MoD as the two military entities battle for power. According to Ukrainian Defence Minister Oleksii Reznikov, Prigozhin needs the victory in Soledar to prove that his fighters are better than Russia’s national army and elevate his own authority in Russia.

The disagreement leaves Russian President Vladimir Putin in a difficult spot, as he can either choose a side to back at the risk of losing support from the other, or take on more responsibility and place himself as commander-in-chief, according to former Russian officer Igor Girkin. Putin has previously exploited Prighozin’s army and publicly distanced himself from any military failures.

Following a series of humiliating defeats in the autumn last year, Russia is keen to save face and secure a victory in Soledar. The small-salt mining town is seen as a key strategic point for the capture of Bakhmut, 18 km south of Soledar, a major transportation hub and an obsession of General Sergei Surovikin, who was appointed as overall commander of the war against Ukraine following spectacular defeats in Kharkiv and Kherson.

Taking Bakmut would help Russian troops advance towards the Ukrainian strongholds of Kramatorsk and Sloviansk, but Russians have so far failed to do so. As such, Surovikin was demoted to deputy commander and replaced by General Valeriy Gerasimov, BBC News reported on January 11, although Moscow has not explicitly blamed this on the Bakhmut setback.

Moreover, the ISW noted that the fall of Soledar may not provide Russia with a significant strategic advantage to seize Bakhmut. Instead, a victory may be more symbolic, although one with a huge cost of life for Russia.

“Even taking the most generous Russian claims at face value, the capture of Soledar would not portend an immediate encirclement of Bakhmut. Control of Soledar will not necessarily allow Russian forces to exert control over critical Ukrainian ground lines of communication (GLOCs) into Bakhmut,” the ISW stated in its report on January 10.

Russia continues to heavily shell Bakhmut and Soledar, firing 259 and 134 missiles respectively in the past day, according to Donetsk Oblast Governor Pavlo Kyrylenko. One civilian was killed in Soledar and seven injured overall. Approximately 80% of Soledar is destroyed and 60% of Bakhmut.

Russia’s industrial output resilient in 2022 on war spending
Russian budget deficit soars in January, full year deficit could double to over 6% of GDP
Jury still out on the effectiveness of the oil price cap scheme on Russian exports