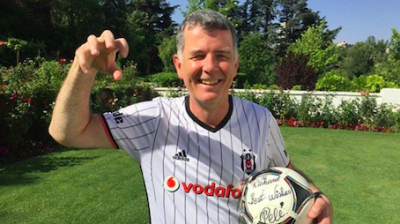 The UK at the end of last week named Richard Moore, who served as British Ambassador to Ankara between January 2014 and December 2017, as the new head of its MI6 foreign intelligence agency.

Now, let’s not get ahead of ourselves here, but a great-grandfather of UK PM Boris Johnson was a Turk.

“I’ve talked to Mr Johnson. You say ‘I’m Turk’. There’re tourists who’d come here from there [the UK]. I told him ‘open their way’”, Turkish President Recep Tayyip Erdogan said on June 9 during a televised interview.

Erdogan and Turkey's First Lady chatting with Johnson during a reception at Buckingham Palace.

According to proliferating reports, including this one from Reuters, the West is currently seeking to bolster its defences against hostile espionage from China and Russia.

Moore, born in Libya 57 years ago, joined MI6, or the Secret Intelligence Service (SIS) as it is otherwise known, in 1987, “just four years before the collapse of the Soviet Union in 1991”.

After he left Turkey, Moore  served as the deputy national security advisor at the UK Cabinet Office.

CIA chief Gina Haspel, appointed in 2018 by President Donald Trump, and Bernard Emie, appointed in 2017 as head of the main French intel agency DGSE, have also worked in Turkey and, like Moore, both speak Turkish.

Haspel served in Ankara for three years as a CIA case officer in the early 2000s.

In April 2019, Haspel’s original CIA badge photo was featured in the CIA’s first-ever Instagram post, along with a Turkish talisman to protect against the evil eye, said to have come from her office.

And that’s not all.

Vladimir Putin’s spokesperson Dmitry Peskov is a Turkologist who served as an official at the Soviet/Russian embassy in Ankara from 1990 to 1994.

Moore proved to be an unprecedented ambassador. He ran big public relations campaigns during his service in Ankara that were pretty successful.

He was rather active on Twitter and speaks Turkish pretty well. He even took part in weekend chat shows on Turkish TV, taking his wife along.

Moore, not to be confused with Bond actor Roger Moore of course, is a congress member of big Istanbul soccer club Besiktas.

Then UK Ambassador to Ankara, Moore, celebrating a Besiktas triumph at his embassy.

It is also known that Suleyman Seba, president of Besiktas from 1984 to 2000, served for some time in the Turkish National Intelligence Organization (MIT), rising to the rank of colonel.

“From this context, one may suggest that Moore’s promotion to head of MI6 will result in even closer cooperation between the two countries by creating a special channel with the National Intelligence Organization [MIT] led by Hakan Fidan,” he added.

“This news also comes with MIT’s role in Turkey’s security and foreign policies in a process of expansion, as stated by President Recep Tayyip Erdogan last week. He particularly cited the Turkish army’s engagements in Syria and Libya as well as the fight against terror outside the Turkish territories. Thus, more dialogue and cooperation between MI6 and MIT should not surprise anybody,” Demirtas went on.

“As a matter of fact, the bilateral cooperation in the field of security, particularly in anti-terrorism combat, is already very good and satisfying both governments. Under Moore’s helm, one may only envisage a deeper and effective institutional relationship between the two intelligence services,” Demirtas added.

“Too bad sex cultist/conspiracy theorist/would be mahdi Adnan Oktar is in jail. I bet he'd have lots to say about Former British Ambassador to Turkey, Richard Moore, being appointed head of MI-6. I'll just leave you with this golden oldie,” Howard Eissenstat of St Lawrence University, a sometime expert on Turkish politics, wrote on July 29 in a tweet.

The professor has it right. Only fools like Mr Oktar, aka Harun Yahya, would think of conspiracies when it comes to spies and diplomats.