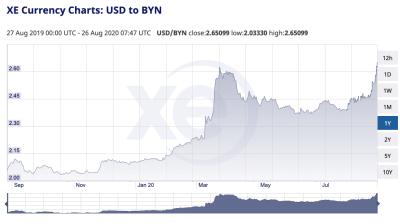 The Belarusian ruble fell towards a record low against the dollar on August 24 due to mounting fears of a protracted political crisis / wiki
By bne IntelliNews August 26, 2020

The Belarusian ruble fell towards a record low against the dollar on August 24 due to mounting fears the showdown between the people and self-appointed President Alexander Lukashenko could drag on for months and cause an economic crisis.

The protest movement looked like it was losing momentum last week after the embattled president, who is accused of massively falsifying the August 9 presidential election in his favour, mounted an effective counter-offensive against his rebellious people.

However, the popular uprising got a new lease of life following a massive turnout for the March of the New Belarus demonstration on August 23 that attracted at least quarter of a million participants and overwhelmed the police presence sent to break the meeting up.

A general strike is now in place at most of the biggest state-owned enterprises (SOEs) that is still holding, despite management’s efforts, which include sacking the most outspoken strike leaders and arresting others.

With the big SOEs offline it is only a matter of time before the state starts to run out of money. Belarus currently has only $8bn in reserves, or 2.5 months of import cover, which is not enough to ensure the stability of the Belarusian ruble. Moreover, it has at least $3bn worth of debt obligations to meet this year, but the political crisis has already cut it off from the international debt markets, leaving Russia as the lender of last resort.

Tim Ash, senior sovereign strategist at BlueBay Asset Management, reported in a note to clients that sanctions against the ownership of Belarus’ two outstanding Eurobonds are being discussed in some circles as a way of applying more pressure on Lukashenko, who have so far refused to even acknowledge the newly established Coordinating Council, set up by former English teacher and nominal victor in Belarus’ presidential election Svetlana Tikhanovskaya to negotiate a peaceful transfer of power and fresh elections.

The central bank halted overnight lending to commercial banks on August 25 until mid-September to try to stabilise the currency. If those efforts fail, interest rate hikes could be possible, analysts at Raiffeisen Bank wrote in a note on the same day.

The Belarusian economy is already heavily dollarised thanks to multiple currency crises in recent years, but there are also anecdotal reports of Belarusians selling their rubles and stocking up on dollars in anticipation of a fresh economic crisis brought on by the halting of the economy.

“On balance, looks like Lukashenko will eventually use extreme and overwhelming force to end demonstrations. Likely the ranks of his security forces will be boosted by the deployment of Russian troops – little green men, likely lacking proper insignia as in Crimea in 2014,” Ash wrote in a note. “Guess at the moment they are hoping to play for time to wear demonstrations out – and hope the West takes its focus elsewhere. [But the] demonstrations in Ukraine in 13/14 did not tire, [and I] think Lukashenko and Putin will want this resolved before US elections [in November].”