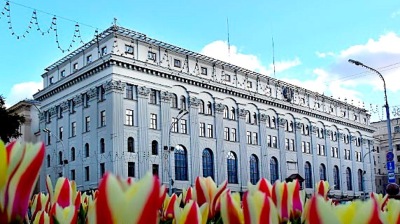 The National Bank of the Republic of Belarus
By bne IntelliNews April 15, 2021

The National Bank of the Republic of Belarus (NBRB) will hike its key interest rate by 75bp from April 21 to 8.5% to combat rising inflation, the bank said on April 15, as cited by BelTA.

In addition, the bank’s overnight lending rate will be increased to 9.5%, and the overnight deposit rate to 7.5% per annum, the PR Department of the NBRB said.

The central bank put off a rates decision last month due to volatility on the market. Belarus is suffering from mounting price pressures, as are most of the countries in the region. Ukraine has already hiked rates twice and Russia once for similar reasons.

“In late 2020, inflation processes accelerated, which was caused by the transfer to prices of the occurred weakening of the Belarusian ruble, as well as supply shocks in the markets of certain food products. At the start of 2021, inflation continued to accelerate under the influence of further increases in world prices for food products, as well as for imported non-food goods, the cost of which increased for the consumer due to increased logistics costs and supply disruptions due to the pandemic. Additional pro-inflationary impact on the domestic market of Belarus was formed in connection with the abolition of value added tax benefits,” the central bank said.

Inflation is currently running above the central bank’s target rate of 5%. As of March 2021, the increase in consumer prices made 8.5% in annual terms.

The NBRB worries that the impact of food price shocks, and also the consequences of the pandemic in terms of higher costs of imported non-food products, may be more significant on inflation in Belarus.

“Taken together, these factors form prerequisites for the preservation of elevated inflation expectations of economic agents for a long time, which increases the risks of preserving elevated inflation in the future. At the same time, weak consumer and investment demand within the country will somewhat limit inflation. Under these circumstances, in order to limit the pro-inflationary risks and strengthen measures to control the money supply, the Board of the National Bank decided to increase the refinancing rate by 75 basis points,” said the central bank.

Experts forecast a decrease in the quarterly growth rate of consumer prices starting from the second quarter. At the same time, the earlier acceleration will be reflected in the annual inflation rate until the end of the current year. It is expected that the annual rate of price growth will increase in the second quarter compared to the current value and then decrease by the end of the year. In December 2021, consumer price growth is estimated to be about 7%. The estimated medium-term target is for about 5%.