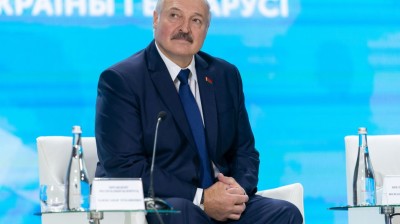 Belarusia's authoritarian President Aleksandr Lukashenko has pledged to prevent Ukraine-style street protests in his country during the August presidential election.

"The goals are clear: to organise a Maidan in the run-up to the presidential election or on voting day. That was their plan. Using this meeting I would like to warn you and all people who will hear us, I want to warn all those ‘Maidan fanatics' that there will be no Maidans in Belarus," propagandist state news agency BELTA quoted Lukashenko as saying during a meeting with the KGB security service chief Valery Vakulchik on June 1.

Lukashenko, Central and Eastern Europe's longest-ruling head of state, added that "some people" want "to sell cheaply everything created not only by President Lukashenko, the authorities but also by people. This is inadmissible. I want to re-iterate, I want to tell those ‘Maidan fanatics' once again that we will do our best to keep the situation in our country stable."

Lukashenko told journalists last September that he is going to remain in his post "for as long as the people will trust me", as well as "for as long as I am healthy. If you are unhealthy, there's nothing for you to do as president. The main things are health and people's confidence," he said.

He added at the time that the transfer of power was not considered an option in Belarus. "Our president will be elected only by the people."

Meanwhile, thousands of people in Minsk and other major Belarusian cities gathered on May 31 to protest against Lukashenko's rule, taking part in collecting signatures in support of opposition presidential bidders. In Minsk, some 2,000 people attended a protest.

According to the Viasna human rights watchdog, which has no official registration in Belarus due to Minsk's opposition to its activities, at least 30 opposition activists were arrested across Belarus on May 31. Some of those arrested were released on the same day, the BelaPAN news agency reported.

A police officer was seen lying on the ground following a clash that occurred when people attempted to prevent what appeared to be the arbitrary arrest of the blogger. He and at least 15 other people were grabbed by a riot police squad immediately afterwards in what was widely seen as the result of a choreographed provocation, according to BelaPAN.