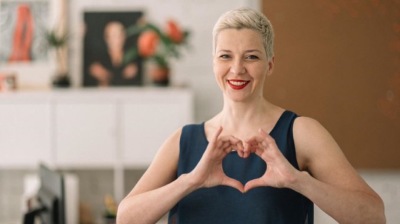 Belarus’ opposition leader Maria Kolesnikova, one of the three women that fought Belarus self-appointed Alexander Lukashenko in the August 9 presidential elections, says its too soon for EU sanctions that will make negotiations with the state more difficult The EU imposed selective personal s / wiki
By bne IntelliNews August 17, 2020

Belarusian opposition leader Maria Kolesnikova, one of the three women that fought Belarus' self-appointed president Alexander Lukashenko in the August 9 presidential elections, says it's too soon for EU sanctions that will only make negotiations with the state more difficult.

The EU imposed selective personal sanctions against Lukashenko and members of his entourage involved in falsifying the elections and unleashing the brutal police crackdown on the protests that followed last week.

The EU is still deliberating but expects to announce more measures by the end of the month.

However, Kolesnikova says the measures will hinder the chances of Brussels and the Belarusian opposition of starting a dialogue on Lukashenko’s exit from power. Kolesnikova is now the only member of the trio still in Minsk after her colleagues Svetlana Tikhanovskaya, who actually won the election according to independent polls, and Veronika Tsepkalo both fled the country last week under duress and to escape arrest.

Kolesnikova joined forces with Tikhanovskaya and was formerly the campaign manager for jailed ex-banker and leading opposition candidate Viktor Babariko.

The time for penalties "is not yet ripe", Kolesnikova said in an interview with the German newspaper Welt am Sonntag, published on Saturday August 15.

“Economic sanctions will hit ordinary Belarusians in one way or another, as the past shows,” Kolesnikova said. At the same time, sanctions against specific Belarusian politicians will worsen the chances of the EU, as well as the chances of the opposition in Belarus, of holding a dialogue with officials in Minsk on forming a transition government.

Events are moving very fast in Minsk. Protests broke out only hours after polling stations closed on August 9 after the government announced Lukashenko had won by a massive landslide victory and violence rapidly escalated in the following two days with two protestors losing their lives in the street fighting. The tide turned on Thursday August 13 when the protestors refused to be cowed by the police brutality and the state backed off, apologising for the beatings, and began to release detainees. A wave of strikes followed and culminated in massive rallies on August 16 with more than 200,000 people gathering in central Minsk alone, according to estimates – the biggest rally in Belarus’ history.

As the protests movement gathers momentum Lukashenko looks increasingly isolated and is now entirely dependent on the security forces. Tikhanovskaya has already offered to open talks with Lukashenko on forming a transition government, to which Lukashenko has not responded.

The Tikhanovskaya team has made it clear their overriding goal is to eject Lukashenko from office and manage a peaceful transition to a freely elected government. The main thing is to “stop violence against innocent people,” Kolesnikova reiterated in her interview.

The protests have reached a critical mass and Lukashenko’s rule now appears untenable. Belarus has reached the “3.5% rule” limit: a rule of thumb holds that peaceful protests are twice as likely to succeed than violent ones, and no protest movement that has engaged 3.5% of the population has ever failed. With a population of 10mn, Belarus needs to have 300,000 join the protest to reach this threshold and passed that number at the weekend.

Kolesnikova called on Belarusians to renounce violence, regardless of whom they support. According to her, the Belarusian opposition has been trying to establish contact with the authorities for several days, but has not received an answer.

“We are ready for dialogue,” Kolesnikova emphasised: "Our goal is to stop violence against innocent civilians. It is hard to imagine that such cruelty reigns in the centre of Europe in the 21st century,” she continued. “But if there is at least a one in a hundred chance to stop violence on the street, then I would be ready to personally sit down at the same table and talk with President Alexander Lukashenko ".

During a EU extraordinary meeting in Brussels on August 14, the foreign ministers of the EU countries agreed to impose sanctions against Belarusian officials responsible for the brutal suppression of mass protests. The EU Foreign Service has been instructed to draw up a list of persons involved in electoral fraud and dispersal of rallies in Belarusian cities.