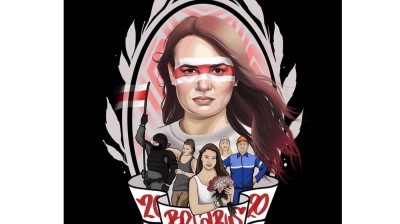 The Belarusian Investigative Committee has branded opposition leader Svetlana Tikhanovskaya a terrorist. She said that the opposition won't seek dialogue with President Alexander Lukashenko, who is only interested in staying in power. / wiki
By bne IntelliNews March 30, 2021

Opposition leader Svetlana Tikhanovskaya said that the opposition is making no attempt at any dialogue with Belarus' self-appointed President Alexander Lukashenko, but is focusing on appealing directly to those working in his administration, Tass reports.

"First of all, I must admit that we do not seek dialogue with Lukashenko himself," Tikhanovskaya said as cited by Tass, adding that Lukashenko is “only interested in staying in power."

"He does not care about his country, he only cares about himself," Tikhanovskaya believes.

"But we are certain that there are people in the government, in [the president’s] inner circle, who think like the majority of [Belarusian] people, who want to build a new country for a new generation, who do not want our children to live under […] a dictatorship," Tikhanovskaya said.

"We understand," Tikhanovskaya underscored, "that it is easier to have these contacts not with Lukashenko […] but with people within the system."

"Therefore, we seek to establish these connections. And we already contact some people in secret. We have secret contacts in the Foreign Ministry, in the police. They hand us information, video footage of torture and violence," Tikhanovskaya said.

The opposition have recently launched a number of initiatives to undermine the authority of the government and in an attempt to split support for Lukashenko inside the regime.

Amongst other things, Tikhanovskaya has called for a nationwide online poll in a bid to renew the opposition popular mandate to stand against Lukashenko. If large numbers vote – and previously some 5% of the population have participated in similar online votes – the effect will be to emphasis to Lukashenko’s elite they are on the wrong side of history.

Likewise, the opposition have released their own draft version of a new constitution ahead of proposed changes, suggested by Lukashenko himself, thus taking the initiative in that debate.

In reponse, Belarus’ investigative committee has opened a criminal investigation into Tikhanovskaya, accusing her of being a terrorist. Tikhanovskaya currently lives in exile in Lithuania, where she fled with her children after being threatened by the security forces shortly after the disputed August 9 elections.

During last year’s mass protests Nexta became the main means of communication and actively helped the crowds of protesters organise themselves into a leaderless but high effective and mobile force of demonstrators.

"Based on all the collected physical evidence, the investigators found signs of a foreign extremist organisation in their [opposition] activities. Now the Investigative Committee’s Department for Minsk has initiated the recognition of the editorial board, which was in fact established by Stepan Putilo and other individuals, as a foreign extremist organisation and its ban in the Republic of Belarus," the statement says.

The committee pointed out that the papers had been readied and already submitted to the corresponding bodies for decision-making.