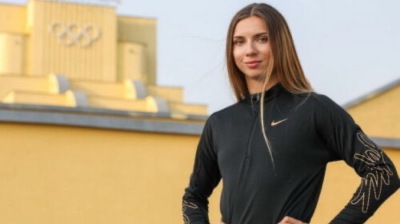 Belarusian Olympic team officials tried to force sprinter Kristina Timanovskaya to fly home to Minsk where she faced possible jail for criticisms she posted on social media during the Tokyo games. / twitter
By bne IntelliNews August 2, 2021

Belarusian Olympic sprinter Kristina Timanovskaya is seeking asylum in Europe after escaping from Belarusian governement minders that were trying to force her to fly home on August 1, where she faces possible arrest and imprisonment.

An Olympic 200m sprinter, Timanovskaya had made disparaging remarks about Belarusian President Alexander Lukashenko’s regime on social media. She was then removed from the team and ordered to fly back to Minsk, where she faced possible arrest and imprisonment.

The orders for her to return home came from “the very top,” she said the officials told her, during a short telephone interview.

“I’m not afraid of being kicked out of the national team, I am afraid that in Belarus I might be imprisoned. Officials say the order to get rid of me came from the very top.” Timanovskaya said in a short phone interview with Belarusian news outlet Tribuna.

“I consider the situation around the Belarusian sprinter Kryscina Cimanouská to be scandalous. The Czech Republic is ready to help. In agreement with @AndrejBabis and @jhamacek, we offer her a visa to enter the territory so that she can apply for international protection with us,” Kulhanek posted on Twitter.

The Belarusian state-controlled media lashed out at Timanovskaya after she escaped her minders and appealed for asylum from the international community.

“To illustrate the political climate in today’s Belarus here is what Tsimanouskaya has been called by the regime ‘journalists’: a bitch, a prostitute, lousy and rotten, a white n**ger, time to kill ‘em, let’s send her to a refugee camp in Lithuania so she’ll be raped by 200 Arabs,” NEXTA editor-in-chief Tadeusz Giczan reported.

The National Olympic Committee of Belarus announced it had decided to send Timanovskaya home over her emotional and psychological state. Separately, the committee claimed that she had not completed all the tests required of athletes and therefore had to return home, without specifying what tests she had failed to complete.

Timanovskaya said that claim was "not true" and said she had not been examined by doctors.

Lukashenko threatened the nation's athletes if they did not perform well, telling them “not to bother” coming home if they didn't win any medals. So far Belarus has won the one medal.

The opposition Belarusian Sport Solidarity Foundation claimed that Timanovskaya was being forcefully taken from Tokyo over her criticism of the Belarusian athletes trainers’ headquarters.

Timanovskaya initially said in an interview she intended to ask for asylum in Austria, but subsequent reports say she has asked for asylum in Poland, which has a large Belarusian diaspora. After she was ordered home she appealed to the International Olympic Committee to intervene in the situation and provide assistance.

One Belarusian national who lives in Tokyo immediately went to the airport after the news broke and offered to give Timanovskaya shelter in her apartment if she chose to remain in Japan.

Timanovskaya spent the night at a hotel close to the airport and is expected to leave the country on August 2 for a European destination.

The IOC has launched an investigation and a lawyer specialising in asylum law has been appointed.

Timanovskaya's husband and child also left Belarus on August 1 after the news broke and are now in Ukraine.