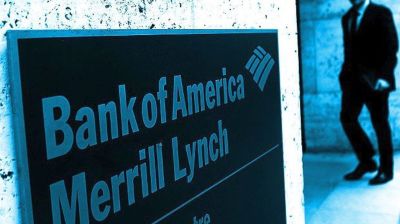 Trader Alexander Popov, who was with the bank for four years, left in July, according to  investment banking sources. Popov’s departure comes two months after the departure of the head of equities, Will Abbott, which reduced the team’s headcount to about 20 bankers, or around half of its 2014 level.

A Moscow-based spokeswoman for BofAML said the bank remains committed to Russia, but declined to discuss Popov’s departure or the staff strength in the Russian capital. Popov did not respond to emails seeking comment.

“Bank of America Merrill Lynch has definitely no intention of withdrawing from the country,” the lender told bne IntelliNews.

However, the bank didn’t earn a single dollar in investment banking fees from Russia in the first six months of this year, according to data compiled by New York-based consultancy Freeman & Co. That followed a stellar second half of 2015 when its bankers earned $18mn after a barren period over the previous 18 months.

Of announced deals so far in 2016, the bank is understood to have been appointed for an advisory role for the privatisation of Sheremetyevo, Moscow’s largest airport. Other M&A advisory roles are also believed to be in the pipeline.

On the trading side of the business, sources close to BofAML said its team remains “very active and strong”. The bank is very active in the trading of Russian global depositary receipts with a 21.5% share and $23bn traded, compared with a 12% share for rival Citigroup.

BofAML said also a leading trader of RTS futures with a 38% market share amongst the international group of banks consisting of Credit Suisse, Morgan Stanley, Citigroup and UBS. On the ruble-denominated Micex bourse, the bank is understood to be the third biggest among the internationals with a 16% share.

Investment banking fees from Russia have been annihilated by the collapse in commodity prices and sanctions over Ukraine. After Russia annexed Crimea in March 2014, the EU and the US imposed financial restrictions, visa bans and asset freezes on scores of Russian companies, politicians and individuals. A collapse in the price of oil, the nation’s biggest export revenue earner, has exacerbated the impact on the economic slump, further slowing dealmaking.

US and European banks have since slashed headcount, salaries and bonuses in Moscow. Some traders and analysts have been relocated, but most expat bankers were let go.

A pickup in deals over the past 12 months has largely benefitted Russian state banks VTB Capital, Sberbank and Gazprombank and lenders from China, who helped fund a bumper $12bn loan to fund the Yamal LNG project in the Far East.

bne IntelliNews reported in June on how US and European banks are losing out in the rebound for Russian deal-making, which has resulted in an almost doubling of fees during the first six months of this year. Revenues earned by investment banks in Russia from mergers, bonds and equity deals in the first half of this year surged by 87% to $159mn from $85mn from the same period a year ago, according to data provided to bne IntelliNews by Freeman & Co.

The US Treasury successfully scared off bankers Goldman Sachs and other top Western institutions from working with the Kremlin on its $1.6bn sovereign Eurobond, even though the Russian government hasn’t been formally sanctioned. Likewise, investors from the US and Europe were warned against investing in such an issue or in Russia’s revived privatisation programme.

bne IntelliNews reported in February that Jefferies had become the first major US bank to quit Moscow since sanctions were imposed on Russia because of a lack of deals and a pessimistic outlook. British investment banks Barclays and Royal Bank of Scotland have also cut and run over the nine months.

A trading scandal at Deutsche Bank in Moscow led to the closure of its investment bank in September and the loss of at least 200 jobs. Investigators from the US and European regulators are looking at the bank’s use of so-called mirror-trading involving about $6bn of transactions over four years. The total sum of suspect transactions found by the bank could be as much as $10bn, according to unconfirmed reports.

BofAML has been run in Moscow by Alexander Pertsovsky, a former senior executive at Renaissance Capital, since December 2012. The bank, which has canned plans to secure a Russian banking license, is believed to have about four sales traders plus five analysts and a chief economist still on the payroll, as well as back office staff. It is understood that neither Popov nor Abbott will be replaced.

Nick Rees, a headhunter and former Russia country head at London-listed SThree, tells bne IntelliNews that the headcount reduction at BofAML looks more like an attempt to ride out the storm rather than the start of an exit strategy.

“My read on the situation is that they’re simply cutting costs, possibly focusing on those making the money rather than the ones managing them, and then giving a wider range of responsibilities to the CEO/COO to cover any knowledge gaps caused by the exits,” said Rees. “Either way, it seems a cost-reduction exercise quite in line with what many other global companies in Russia are doing now.”