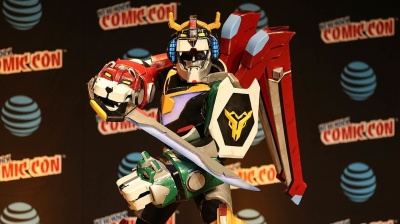 Turkey's most popular Kurdish politician says the anti-Erdogan is dragging its feet. He may have a point.

Sometimes, Turkey’s problems are best embodied in Japanese anime. That at least is the view of the country’s most popular Kurdish politician Selahattin Demirtas, who channelled the spirit of Voltron to express his frustration at opposition inaction.

The cartoon series charts the adventures of an eponymous giant super robot piloted by a team of space explorers. Their mission is to fight evil and, for Demirtas, the parallels with Turkey are plain.

He told the news website ArtiGercek last week: “This oppressive government is rotten to the core, degenerated and embroiled in crime and sin. There is no longer any need to diagnose it or explain it to its tens of millions of victims.

“The truth is that 70% [of society] is now clearly in support of change and is looking to the opposition, waiting for a solution.”

But, he said, the opposition had to unite against this picture: “They can't say anything of substance because they haven't found a way of standing alongside each other. There is no common discourse, no joint slogan that could embody Voltron.”

In essence the two-time presidential candidate, who has now spent nearly six years behind bars, was telling Turkey’s opposition leaders to get a move on. 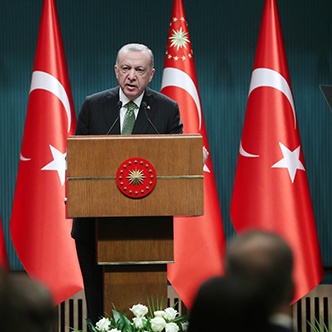 Who will go head to head with bruising campaigner Erdogan? (Image: Turkish Presidency).

It was at the end of February that six opposition leaders – Demirtas’s HDP was conspicuously excluded – jointly declared that if they won power, they would overturn Recep Tayyip Erdogan’s executive presidency and return to a system of cabinet government.

This Gang of Six have since met four times. Their officials have held more regular talks to coordinate their parties’ thinking and draw up policy ideas on how they might rebuild Turkey in a post-Erdogan era.

Four working committees are now in place to discuss matters like public accounts, judicial independence and transparency. The exercise may well be worthy, but it will all come to nothing if they don’t actually win power – and that involves a single candidate defeating Erdogan in a head-to-head contest.

Many opposition supporters are deeply frustrated that the identity of that woman or man is still not clear, even though there are four plausible contenders who are consistently polling better than the president.

Three possibilities are members of the centre-left CHP, the biggest of the six parties: leader Kemal Kilicdaroglu, as well as Ekrem Imamoglu and Mansur Yavas, respectively the mayors of Istanbul and Ankara.

None have formally declared a bid for the presidency; all are known to covet it.

A fourth prospect is from the centre-right Iyi (Good) Party: Meral Aksener has ruled herself out of the running, but her resolutely high polling numbers could change her mind.

As far as Demirtas is concerned, it is about more than picking a name: he said the six opposition parties were failing to provide a coherent message to undecided voters.

To be fair to the Six, a lot of work is being done and it isn’t all about meetings to coordinate policy ideas – something that, while necessary, doesn’t necessarily quicken the pulse. The party leaders are becoming increasingly visible by touring the country, engaging with voters to hear their complaints and being noticed even by pro-government media.

But the reality is that the next election, which may happen this autumn but must be called by next summer, will be largely decided by socially conservative voters. For many of them, their choice will only become clear when a candidate is in place to rival Erdogan.

These are people who supported the president in the past but, as consumer prices soar and the value of the lira plummets, are feeling the pinch of Turkey’s economic decline. Yet a personality contest is precisely what the president wants. He is at his most powerful on the campaign trail and he has dispatched lesser rivals in the weeks leading up to previous elections.

What is more, each of his four would-be rivals have clear handicaps, which he will ruthlessly exploit from the moment they are named. That, many say, is why no opposition candidate has yet been declared: they would be corroded well before the election is called through constant attacks on their integrity and personality.

Although Demirtas’s thesis – that as many as seven in 10 voters have now turned against the president and his government – might be true, it is perfectly plausible too for Erdogan to win, especially if the opposition remains fragmented.

Forgive me for returning to Japanese anime but it’s relevant: Voltron could only take form if its operators were in harmony with one another – and even then, the process required a vast amount of energy. Once assembled, however, the super robot was virtually unassailable.

So perhaps Demirtas is right: it might be time for the opposition to stop fearing Erdogan and to confront him. Naming the candidate will be their biggest step yet.

OPINION: Bosnia economic salvage supplants breakup mood
5 days ago
ASH: Turkey is heading to “incumbent democracy”
5 days ago
RIMMER: You only sing when you’re winning
6 days ago
Hungary faces risk of severe economic instability if it does not get frozen EU funds, warns Oxford Economics
9 days ago
COMMENT: Tokayev to win Kazakhstan election but then face most testing years of his presidency
9 days ago